President Obama Urges Employers Not to Stigmatize the Long-Term Unemployed 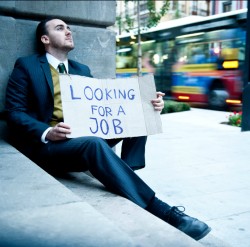 When job candidates update their resumes, they highlight their experience, education and other notable skills in hopes of scoring an interview. Unfortunately, research suggests that there is one key, often overlooked factor that could cost even highly qualified candidates a call-in: Length of unemployment. The longer a candidate has been without work, the less likely they are to get a call. President Obama wants this practice to stop.

The White House and the Society of Human Resource Professionals joined forces Friday to announce a campaign to help long-term unemployed Americans find jobs, reports the Philadelphia Inquirer. President Obama highlighted some of the challenges these candidates face -- especially their stigmatization.

"Folks who have been unemployed the longest often have the toughest time getting back to work," the president said, as reported by The Miami Herald. "It's a cruel Catch-22: The longer you're unemployed, the more unemployable you may seem."

The president highlighted research that suggests those who have been out of work for eight months or more are called in for interviews only half as often as those who have been unemployed for just one month, even when candidates have identical resumes. This suggests employment status may play a larger role in the applicant screening process than experience and other credentials.

"Statistically, the long-term unemployed are oftentimes slightly better educated, in some cases better qualified, than folks who just lost their job," Obama said. "Just because you have been out of work for a while does not mean that you are not a hard worker. Just means you had bad luck or you were in the wrong industry or you lived in a region of the country that's catching up a little slower than others in the recovery."

The president announced a joint campaign with the SHRP to encourage employers to stop stigmatizing candidates who have been unemployed for more than six months, reports The Inquirer. They have asked SHRP's more than 260,000 members to sign a pledge to review their hiring practices and remove barriers that could unfairly screen these applicants out. More than 300 companies have already signed the pledge, including Apple, Ford and Wal-Mart.

"It's time for some of us to begin thinking differently," SHRP President Henry "Hank" Jackson said in a statement acquired by the Inquirer. "In one of the toughest economies the United States has ever seen, unemployment on a candidate's resume is more of a white flag than a red one. Employers must be able to recognize the human capital potential in the ranks of the long-term unemployed."

The SHRP has released a list of best practices for participating companies for recruiting the long-term unemployed. Recommendations include reviewing screens and hiring procedures to identify those that could unfairly weed out candidates based on their long-term unemployment status, and ensuring advertising and jobs ads do not discourage these candidates from applying.

"Out of work, out of luck: A new effort to help," philly.com, January 31, 2014, Jane M. Von Bergen, http://www.philly.com/philly/blogs/jobs/INQ_Jobbing_Out-of-work-out-of-luck-A-new-effort-to-help.html