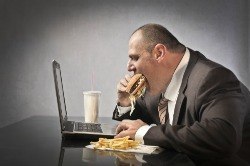 A new study published in the Journal of Preventative Medicine revealed that workers in certain industries are more likely to be obese. This conclusion was reached after analyzing the answers of 15,000 working adults who participated in the 2010 National Health Interview Survey, of which almost 28 percent were obese, noted MinnPost.

According to the study, the four industries with the highest levels of obesity include public administration, utilities, information, and transportation and warehousing. Healthcare and social assistance took fifth place, followed by manufacturing, construction, administrative support, mining, and agriculture, forestry, fishing and hunting. Several of the top spots were ironically held by industries that require physical labor. However, it's been shown that factors other than physical activity make a difference in obesity levels and the overall health of any population of workers.

For example, work environment and stress appear to play a role. According to the study, those who work more than 40 hours per week were more likely to be obese, as were those who claimed to work in a hostile work environment. And it makes sense. As an article in Time recently pointed out, employees who work long hours may have fewer opportunities to exercise, and workplace stress has been shown to contribute to unhealthy lifestyle choices that can ultimately lead to weight gain.

That's why the fact that healthcare workers had higher-than-average levels of obesity shouldn't come as surprise, even though it seems contradictory to industry goals, noted Medical Daily. However, researchers were quick to point out that the obesity was more prevalent among clerical healthcare workers, who spend the majority of their time sitting, as opposed to doctors and nurses, who spend a lot of time on their feet.

Workers ages 18 to 29 reported the lowest prevalence of obesity across all industries, as did non-Hispanic Asians and individuals who held a college degree. The study also showed that health services workers on the higher end of the pay scale were less likely to be obese than their peers. When analyzing specific professions within each sector, the careers shown to fare the worst were protective services, community and social services, healthcare and social assistance, and architecture and engineering.

Authors of the study hope that employers will use the findings to promote institutional changes that encourage positive habits, which may in turn lead to lower levels of obesity and stress-related illness.

"This study presents additional evidence that selected occupational factors, specifically long work hours, hostile work environments, and employment in certain industries and occupations, may contribute to the current epidemic of obesity in the U.S.," wrote the authors of the study. "Public health professionals and employers should consider workplace interventions aimed at reducing obesity that take organization-level factors, such as scheduling and prevention of workplace hostility, into account along with individual-level health behaviors such as diet and exercise."