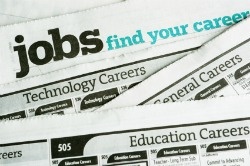 The October jobs report released today from the Labor Department showed little change over last month, but there were some signs of growth.

The unemployment rate and the number of unemployed fell slightly to 9 percent and 13.9 million, respectively, but the numbers were about the same as last month. The report from the Bureau of Labor Statistics said that all together, the economy added 80,000 jobs last month--the fewest in four months. Private sector employment increased by 104,000 jobs, while government agencies shed 24,000 jobs.

Nevertheless, there were some positive signs: The BLS revised its figures for August and September, noting that about 100,000 more jobs were added to payrolls each month than initially estimated.

Other heartening news in the October jobs report included the average hourly earnings, which rose slightly by 5 cents to $23.19, following a gain of 6 cents during the month of September. Average hourly earnings have increased nearly 2 percent in the last 12 months. In addition, the number of long-term unemployed dropped 366,000 to 5.9 million, while the number of those employed part-time for economic reasons decreased by 374,000 to 8.9 million.

"If you look at it now, we actually struggled a bit to try to give some context, and you can pick the last four months," BLS senior analyst Tom Nardone said in an interview with Market News International. "If you look at over-the-month changes this year you had three really strong months, then May and June were really weak, and the last four months average 117,000 a month. That brings the monthly average closer to that for the year, of 125,000 a month."

As CBS News reported, the July-September period marked the best quarterly economic growth in a year, mostly because growth in consumer spending tripled during that time. But economists are concerned that such spending will not continue, particularly since Americans spent more during the third quarter even though they earned less, using their savings to make up the difference.

"There is not enough demand to support more than the modest job growth seen in September and October," noted Kathy Bostiancic of The Conference Board in a press release. "While it may be enough to barely escape recession, the gain in jobs and incomes is not enough to offset consumer pessimism. The economy is simply not strong enough to deliver more than 125,000 jobs a month and continues to struggle to deliver even that much. There is no help on the way from monetary or fiscal policy, at the federal, state, or local level. It all adds up to a labor market struggle, continuing right through the upcoming holiday season and into winter."

"Modest Job Growth in a Sluggish Economy is All We Can Muster," conference-board.org, November 4, 2011