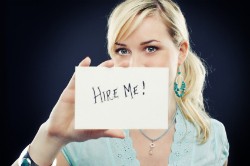 High school students and college students home for the summer who are looking to make a little money over break should be happy to hear that employers are planning to hire more seasonal workers this summer.

"A number of indicators show that this season should be better than the past several years, including more hiring managers making hires and a greater number of those folks indicating that they will bring on more employees than the previous season," said Shawn Boyer, CEO of SnagAJob, in a statement.

However, despite the positive job outlook, a new type of worker is competing with teens and young adults for seasonal gigs. According to MSNBC, many teens are being pushed out of consideration by older unemployed adults.

As Smart Money pointed out some 6.5 percent of workers 55 or older are unemployed and although that percentage is less than the unemployment rate for young adults, older adults take longer to rebound--whereas 25- to 54-year-olds can find a new job in 30 weeks, workers 55 and older tend to take 35 weeks to find a new job. As a result, many older adults--retirees returning to the workforce as well as those unemployed and looking for work--are inching their way into territory that was once dominated by high school and college students.

"The recession has changed things," said Dan Ryan an executive search consultant and panelist for the Society of Human Resource Management and a principal at staffing firm Ryan Search & Consulting. "In general, older people and workers in transition are doing things they wouldn't have done before."

In many cases, employers prefer older workers because they have more experience than students. In fact, in recent years experience has become an important criterion for a job candidate--27 percent of employers said it was very important, compared to 20 percent in 2008.

MSNBC reported the food service industry and retail industry are two sectors were older workers are pushing out teens for jobs.

"Over the last decade, while the number of people employed in food services went up by one million, the number of 16 to 19-year old workers dropped by one-quarter of a million, whereas the number of workers aged 55 and older went up by 128,000," said William Even, a labor economist with Farmer School of Business at Miami University in Ohio.

Other popular summer jobs for older adults, particularly retirees, can be found at ballparks; campgrounds; amusement parks; and national, state, and community parks, according to AARP. Pet-sitting is also a popular summer job for retirees.

However, young or old, experienced or not, CNN Money pointed out that all summer job seekers should start looking immediately. Rebecca Rogers-Tijerino, a senior vice president for temp staffing firm Adecco told CNN Money that if job seekers still have not found a job by mid-May, chances are they probably won't get one.