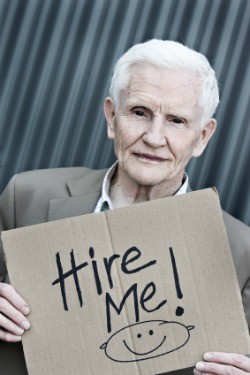 The recession has hit workers over age 50 particularly hard: Many of them have lost their jobs and are having difficulty getting rehired, and they believe that their age is the cause for both.

"There is no question that age bias is rampant throughout American society and in the workplace in particular," said Howard Eglit, a professor at Chicago-Kent College of Law who was interviewed by MSNBC. He noted that many people mistakenly believe that older workers are less adaptable, get injured and are absent more, and contribute to higher health insurance costs.

Those perceptions are undoubtedly making it harder for older workers to find employment. According to an AARP report on August's employment data, job seekers ages 55 and over were unemployed for an average of 52.4 weeks, compared with 37.4 weeks for the younger jobless. Moreover, 54.9 percent of older unemployed workers were out of work for at least 27 weeks.

"When companies want to downsize, the knee-jerk reaction is cut the older workers," explained Laurie McCann, a senior attorney with AARP, who was quoted by MSNBC. "They want to do more with less, and they think they have to cut the least productive workers. One stereotype is the older workers are not as productive."

Alicia Munnell, the director of the Center for Retirement Research at Boston College, agreed. "The harsh truth is that most employers have no great enthusiasm for gray hair," she told CNBC. "They prefer younger workers."

The AARP report also found that the number of older workers considered to be "discouraged" rose to 287,000 in August. Before the start of the recession in December 2007, only 53,000 older workers were classified as discouraged. According to the AARP, discouraged workers have stopped looking for work because they believe there are no jobs available, workers would find them too old, they lack the necessary training, or they face other discrimination.

"Now all of a sudden we're finding employers don't want us," said a 52-year-old unemployed engineer who was interviewed by National Public Radio. "Why is this happening? It's because we're older, and there's this false perception out there that we're no longer any good, and we're going to cost more money."

NPR pointed out that the unemployment rate for middle-aged people is less than the overall population, and significantly less than for very young job seekers. But workers over 50 tend to have more financial responsibilities, such as supporting a family or education costs for children.

Human resource professionals note that there are simply fewer leadership positions available, which is why it might take older workers a longer time to find a good job.

"There are not a lot of jobs out there," Munnell told CNBC.