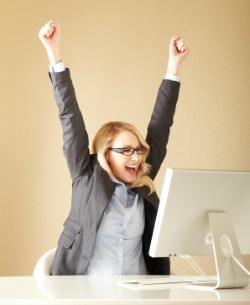 If you are reading this article between checking today's Olympic medal count and heading to the next staff meeting, you are in good company: New research reveals that more than a quarter of U.S. workers are watching the Olympics on-the-job. But while U.S. patriotism is high, this trend can spell bad news for employers who foot the bill in lost productivity.

According to The San Diego Union-Tribune, a recent Captivate Network survey found that 21 percent of U.S. workers admit to following the 2012 Olympic Games in the workplace, a trend the firm estimates could cost employers more than $1 billion in lost productivity. This estimate is up from an earlier survey that suggested just 12 percent of workers would watch the Games on their company's dime.

The Bloomberg Businessweek suggests that much of this viewership is driven by NBC's efforts to make the Games accessible anywhere, anytime from a multitude of devices. NBC Sports Group Chairman Mark Lazarus said the network's goal was to provide "enough content to be consumed if you're at a restaurant having lunch, or at an office with a PC, or an office with a TV," Bloomberg Businessweek reports.

According to The San Diego Union-Times, this level of accessibility does not just cost employers in lost productivity, but can also put tremendous strain on their networks as workers stream live or pre-recorded events from their desks.

"Where it will be most noticeable is the IT department, which is likely to observe a significant slowdown in company Internet speeds, as bandwidth is eaten up by Olympic fans watching streaming videos from their desks," John Challenger, CEO of the Chicago research firm Challenger, Gray and Christmas, told The Union-Times.

In some cases this network drag has been so significant that it has prompted employers to act: According to The Bottomline on nbcnews.com, the City of Los Angeles's Chief Technology Officer Randi Levin asked city employees to stop watching the Games at work for fear of total cyber chaos in City Hall.

"We are experiencing a high volume of traffic due to people watching the Olympics online," wrote Levin in an e-mail to employees last Tuesday. "I respectfully request that you discontinue this as it is impacting city operations."

For some workers, however, even a stern warning will not be enough to dissuade them from following their home team. "I don't know if people are actually going to obey that rule at work," one worker told NBC News. "I mean, this is the Olympics. This is a big deal."

This attitude has led a few employers to cave in. According to Bloomberg Businessweek, New York Financial Advisory Firm NewOak Capital has two televisions set up in the office showing the Olympics, a move that firm President James Fischling says improves productivity in the long run.

"We came to the realization that if we don't do this, people will just wander down to the bar," he said.

Bloomberg Businessweek notes that a loss in workplace productivity during major sporting events is nothing new: The 2010 World Cup reduced U.S. economic output by an estimated $121 million, which paled in comparison to the $175 million lost in the first two days of this year's NCAA basketball tournament alone.