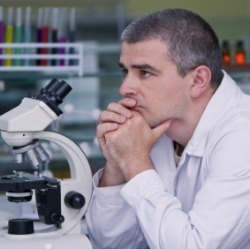 Science, technology, engineering and mathematics, or STEM, careers are often touted as a virtual sure-thing for those in search of high-demand careers. Maybe not, suggests a new study -- at least not among scientists. In fact, declining research funding and job security is so bad that nearly one in five scientists is mulling over leaving the country entirely.

The study, titled "Unlimited Potential, Vanishing Opportunity," was spearheaded by the American Society for Biochemistry and Molecular Biology, and included surveys of more than 3,700 scientists across the United States. According to The Huffington Post, their responses offer a sobering analysis of the state of their profession in the wake of deep budget cuts. For instance, 80 percent said they spend more time writing grants now than they did just three years ago, yet 67 percent said they are receiving less money. Only two percent of respondents said their employers -- typically academic institutions -- ratcheted up funding to help offset lost grant funds.

Why are funds drying up? According to the research, the sequestration -- sweeping federal budget cuts -- has taken its toll. The National Institutes of Health alone had more than 700 fewer funded grants last year, and other organizations report similar results. The study notes, however, that these cuts are not solely to blame, however: Purchasing power at organizations like NASA, the Department of Energy and the Department of Defense has declined by 20 to 30 percent since 2004, due, in part, to inflation.

Whatever its cause, declining scientific investment is limiting research potential and forcing some organizations to trim their staffs. According to the survey, 68 percent of respondents said they do not have the funds to expand their research operations while 55 percent said they have at least one colleague who has or will soon lose his or her job.

"It's quite humiliating to see the incoming graduate students watch me struggle to find a job," Alison Meyer, Ph.D. at Duke University, told The Huffington Post. "Additionally, our lab is running out of funding. My boss is starting to give workers deadlines for departure if they are not currently independently funded by a grant."

Stories like Meyer's or the ASBMB's survey results have attracted powerful attention, including that of President Barack Obama. According to The American Associate for the Advancement of Science's ScienceInsider, the president tweeted about the survey results last weeks and encouraged followers to read the full report. Benjamin Corb, public affairs director of the ASBMB, hopes the exposure incites change, before it is too late.

"The data shows that deep cuts to federal investments in research are tearing at the fabric of the nation's scientific enterprise and have a minimal impact on overcoming our national debt and deficit problems," Corb said in an ASBMB release. "I hope leaders from both parties in Washington review these findings and join with scientists to say 'enough is enough.'"