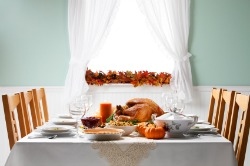 With Thanksgiving just around the corner, many of us are or will be braving the busiest travel day of the year. Some of us, however, may be staying local and spending the holiday with co-workers rather than family.

According to a press release, a survey of 3,484 U.S. full-time workers, conducted by Harris Interactive on behalf of CareerBuilder, found that 19 percent of respondents will not be going home for the holidays and instead will be celebrating Thanksgiving with co-workers. The percentage varied when divided into categories. For example, workers in big business cities, such as Atlanta (35 percent), Dallas (30 percent) and San Francisco (23 percent), were more likely to spend Thanksgiving with co-workers. When broken down by age, those between 35 and 44 were the most likely (22 percent) to spend the holiday with co-workers, followed by 18-24 year olds (21 percent) and 45-54 year olds (18 percent).

"We're a much more mobile society," said Peter Post, managing director of the Emily Post Institute and author of The Etiquette Advantage in Business, to MarketWatch. "We don't often live near our families."

MarketWatch noted that Thanksgiving is typically the first big occasion when co-workers will socialize at each other's homes, but also pointed out that since it will be back to business come Friday for many, it is important to not get too carried away.

Career coach David Couper advised that if you are spending Thanksgiving with co-workers, you should limit your alcohol intake and avoid complaining about other colleagues. After the festivities, it is also important to not talk about your colleague's personal home life with other co-workers.

"You may learn too much about your colleagues," explained Couper in MarketWatch. "You could find out about their dirty bathroom, unpleasant spouse or weird collection of stuffed bunnies."

Conversely, if you are the one hosting a get-together, Andrew Mellen, author of Unstuff Your Life, recommended that you put away anything you do not want your colleagues to see, such as toiletries or medication.

"You can't control what people will do, think and say, but you can control what they will see," said Mellen in MarketWatch.

Some, however, will have to spend time with colleagues at work. Fourteen percent of respondents said they have to work on Thanksgiving. The leisure and hospitality industry reported the highest percentage of holiday workers, with 36 percent. Other industries that will require workers to be on the clock included retail (29 percent), healthcare (23 percent) and transportation and utilities (21 percent).

While most people do not look forward to working on any holiday, Forbes reminded us that doing so has some benefits. While holiday pay is the most obvious benefit, others are more subtle but helpful nonetheless when it comes to career advancement. Stepping up during the holiday is a great way to gain recognition and shows that you are a team player. Additionally, since the boss is likely to be out of the office, it could also be a chance to demonstrate your leadership abilities.

"If by chance, you have been asked, or pressured, or requested to work on a holiday, once you have made your case to try to get out of it, accept your situation, and make the best of it," advised Marsha Egan, a workplace and email productivity coach, CEO of InboxDetox.com and author of Inbox Detox and the Habit of E-mail Excellence, in Forbes. "Being angry about having to work on a holiday surely will not help your career."

"20% of us to spend Thanksgiving with co-workers," marketwatch.com, November 26, 2013, Quentin Fottrell, http://www.marketwatch.com/story/one-in-five-co-workers-spend-thanksgiving-together-2013-11-26