Ongoing Education or Training a Must for Career Relevancy 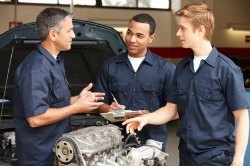 Computers may have revolutionized the way many Americans do their jobs, but a recent report suggests that those same technologies can also make it difficult for workers to remain relevant within their chosen fields.

According The New York Times, the need to constantly adapt to new technologies is a reality in today's workplace, one that impacts professionals in a plethora of industries. As a result, traditional career training -- in college or otherwise -- may no longer be enough. Many workers must also invest in some level of ongoing education. Lynda Gratton, a professor of management practice at the London Business School, calls this new phenomenon "serial mastery."

"You can't expect that what you've become a master in will keep you valuable throughout the whole of your career, and you want to add to that the fact that most people are now going to be working into their 70s," she said in The New York Times. "Being a generalist is, in my view, very unwise."

PayScale reports that businesses have acknowledged the shift, and are putting more money toward employee training initiatives or tuition-reimbursement programs. The trend has also spurred the creation of a crop of new companies designed to deliver online education or training videos: sites like Lynda.com, Udacity and Coursera have seen a major growth explosion in the last few years.

While ongoing training may be the solution for some, a recent study suggests that today's workers may need to rethink their initial training, too. According to Inside Higher Ed, blue-collar manufacturing jobs have been replaced by white-collar positions that require more than just a high school diploma, but less than a four-year degree. If workers want to succeed in these careers, Inside Higher Ed suggests, they need to invest in the right type of training from the start.

According to the study from Georgetown University's Center on Education and the Workforce, there are at least 29 million jobs offering middle class wages that require sub-baccalaureate training. The problem: U.S. workers rarely pursue the associate degrees or certificates required to obtain them. While the U.S. ranks second internationally in the share of workers with bachelor's degrees, it ranks just 16th in sub-baccalaureate attainment.

"Compared to other advanced economies, the United States underinvests in sub-baccalaureate, career and technical education," said Anthony P. Carnevale, the Center's Director and the report's lead author. "This has always been the weakness of the American system."

The solution, Carnevale notes, is a nationwide push toward increasing associate-level education.

Some might wonder if a trend toward associate degrees or certificates would harm traditional four-year degrees or reduce U.S. educational attainment overall, but according to the CEW study, that is not the case. In fact, the CEW study suggests that it could actually bolster four-year enrollment in the long run as students are more likely to pursue higher credentials after taking even a small number of college courses.

"There's more of an educational pathway than I thought," said Carnevale in Inside Higher Ed. "Education begets other education."