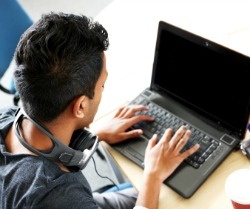 The rapid rise of online education has generated much discussion focused on the benefits of attending school online, such as improved accessibility, flexibility and diversity. A new study from Columbia University Community College Research Center presents a slightly less optimistic view of online learning, however, including the proposition that it could actually widen achievement gaps for men, underperforming and minority students.

Inside Higher Ed reports that a new working paper titled "Adaptability to Online Learning: Differences Across Types of Students and Academic Subject Areas" suggests that while all students have trouble adapting to online learning, a few groups in particular may even be hurt by it. Although most of the nearly 40,000 Washington State community colleges students surveyed were slightly more likely to complete courses taken online, they did so in exchange for lower grades. Some subgroups were particularly susceptible to this trend, including men, African-Americans, younger students, and those who are academically unprepared. For older students, women and high achievers, the difference between online and traditional classrooms is marginal.

"We found that the gap is stronger in the underrepresented and underprepared students," study co-author Shanna Smith Jaggars told The Chronicle of Higher Education. "They're falling farther behind than if they were taking face-to-face courses."

In their conclusion, Jaggars and co-author Di Xu say they are troubled by the idea that online education may actually exacerbate achievement gaps already present in traditional classrooms, like those between male and female or white and ethnic minority students. They say that if the trend holds true across other states and educational sectors, it could mean that online learning actually increases inequity in the classroom.

Kathy B. Enger, online educator and directory of the Northern Lights Library Network, takes a different view, however. Enger told The Chronicle of Higher Education that she believes online education still offers ethnic minority students a number of benefits over traditional classrooms, including the ability to share their thoughts without fear of "microaggression -- say, snickers or eye rolls -- that might be present in a predominantly white classroom.

"There's more freedom for students to express themselves and feel validated in an online environment," Enger said.

The study suggested a number of ways for improving student achievement in online courses, such as pre-screening students or only allowing higher-achieving performers to enroll in them. Jaggars told The Chronicle that such measures might inadvertently weed out students who would greatly benefit from access to online education, however, such as nontraditional students juggling classes with work or family obligations.

"So for older students, you can sort of see the cost-benefit balance in favor of taking more courses online," said Jaggars. "They might do a little worse, but overall it's a pretty good trade-off for the easier access."

Another suggestion was to train online course instructors in how to adequately interact with students in an web format.

"We need a lot more teacher training, showing them tactics to use to try and reach out," said Jaggars, "I think it's difficult for faculty to know how to do that online."

Ms. Enger agrees, commenting that instructors of web-based courses must determine whether or not their online teaching approach is working, and to immediately address problems that do arise. "If it's not working, find out what's not working," she told The Chronicle of Higher Education, "Then make it work."

"Some Groups May Not Benefit From Online Education," insidehighered.com, February 22, 2013