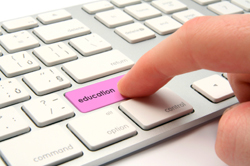 According to a report, nearly one million more students enrolled in online courses last fall--an increase of 21 percent, the highest increase ever.

The eighth annual report, entitled "Class Differences: Online Education in the United States, 2010", was based on responses from more than 2,500 colleges and universities across the country. As Inside Higher Ed pointed out, enrollment jumped to 5.6 million as an additional one million students took at least one Web-based class in fall 2009. Almost a third of all college students in the U.S. now take at least one online course.

"This represents the largest ever year-to-year increase in the number of students studying online," said Elaine Allen, professor of statistics and entrepreneurship at Babson College, co-director of the Babson Survey Research Group and co-author of the study.

This surge in enrollment was most likely a result of the recession, as people usually opt to go to school during tough economic times. Seventy-five percent of the institutions surveyed said the economic downturn drove interest in their online programs.

Growth at for-profit schools, which make up 27 percent of all online enrollments, was also a driving force. However, stricter regulation of the for-profit sector may hinder expansion and, therefore, slow future growth. Approximately 32 percent of for-profit institutions said it would be difficult to comply with new government regulations on financial aid, such as the pending "gainful employment" rule, which would restrict or eliminate federal aid to programs with disproportionate student debt-to-earnings ratios. Ironically, the same force that boosted online enrollment may soon be a barrier as students affected by the recession may not be able to receive financial aid.

Furthermore, although more public schools said online instruction was part of their long-term plans, a lack of state funding may prevent public colleges and universities from expanding their online education infrastructure. Inside Higher Ed noted that while for-profit colleges are the leader of online education, public institutions still enroll about 60 percent of all online students.

Despite some challenges, more educators seem to be warming up to online education, reported eCampus News. Sixty-six percent of all respondents said online education is as good as or better than face-to-face instruction, up from 57 percent in 2003. Among respondents from public institutions, 75 percent said online classes were equivalent to or better than a traditional classroom education.

As Allen pointed out to The Chronicle of Higher Education, online programs seem to be the for-profit sector's "bread and butter". Therefore, she added, colleges are now realizing that "if we want to grow and have profits, we need to be in the online sector".