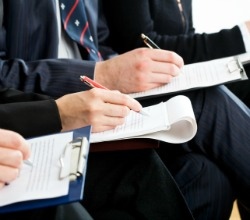 If anyone can appreciate the value of a journalism degree, it is a journalist, right? Maybe not. New research indicates the perceived value of journalism degrees is declining among media professionals, though journalism instructors sing a different tune. Some experts suggest it is time for J-school to evolve -- before it is rendered irrelevant.

According to Inside Higher Ed, the Poynter Institute stated that this opinion gap is "significant," and one that it intends to address in future studies and professional development programs for journalism students, instructors and practitioners. The study results are based on an online survey of 1,800 respondents conducted by the Institute over the last few months. The Institute conducted a similar survey last year -- with comparable results -- but did not ask participants if they had journalism degrees at the time.

Howard Finberg, director of training partnerships and alliances at Poynter and creator of the organization's NewsU, said in a column he penned for The Poynter Institute website that he is troubled by the shifting attitudes regarding the perceived value of journalism degrees today. He said this perception has resulted in the elimination of journalism programs at some colleges, or the incorporation of journalism into wider, less specialized communications curricula. He suggested that journalism schools must evolve if they hope to remain relevant.

Journalists did receive some good news this week, however: According to the Athens Banner-Herald, researchers at the University of Georgia have found that the job market for journalism graduates is showing signs of improvement. Those earning bachelor's degrees in journalism across the country report earning higher salaries this year than last, even when accounting for inflation. The job market remains more difficult for master's degree holders in this field, however.

Journalists have have faced a tough job market over the last few years. Earlier this year, CareerCast ranked newspaper reporter as the worst job in the nation. According to the report, the profession had "lost its luster dramatically" over the last five years. CareerCast said that the print model of journalism is not sustainable, and may be gone within the next decade. The new UGA report suggests things may be improving for journalists as a whole, even if only slightly.

"The job market for journalism and mass communication graduates in 2012 was not much improved from the year before, but the movement was in the right direction, at least for those who earned a bachelor's degree," the researchers reported.