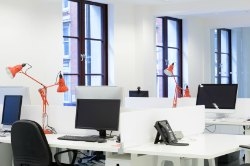 Open-plan office spaces -- typified by their high ceilings and low- or no-wall work areas -- are gaining speed among employers who believe that a more open social space will ignite creativity and collaboration. Research, however, says otherwise.

According to Life Inc., more and more companies are adopting open-office floor plans featuring low- or no-walled pods and that frequently incorporate couches and shared workspaces. The trend -- once seemingly exclusive to tech companies -- is cropping up in all types of industries. In fact, Life Inc. reports that a Teknion Corp. survey published late last year projects that more than three-quarters of U.S. companies are expected to use open, collaborative workspaces by 2015, most likely in an attempt to attract young workers.

"Gen Xers and Yers, they have a totally different view of life," Chris Corrado, president of the office furnishings supplier Environments, told Life Inc. "They have their phones and laptops and iPads. They don't need to be tethered to a desk to get work done."

Some companies take the notion to extremes. According to Life Inc., Microsoft and Intel went so far as to create work stations shared by multiple individuals, a practiced known as "hotdesking." Meanwhile, Forbes reports that Facebook has hired world-renowned architect Frank Gehry to reshape its headquarters into a giant open space that Forbes writer George Anders described as a "giant mosh pit."

Forbes and Life Inc. report that many companies believe that a more open, social space will generate collaboration and creativity. According to The Houston Chronicle, software service company Validas Inc. adopted such a plan because it felt the space would form a "tangible symbol of what the company represents."

"I think there is a transparency here," Validas Chief Marketing Officer Kerry Chrapliwy told The Houston Chronicle. "The offices are glass and it is an open environment with a lot of transparency. That is something we bring to billing."

But while open-space offices are gaining popularity, research suggests they may do more harm than good. According to Life Inc., a 2008 report published by the Asia-Pacific Journal of Health Management suggests that the lack of privacy in open-plan offices can cause conflict, increase blood pressure and lead to more turnover. Some experts say that an open plan may even make a company less competitive in the long term.

"When other people 30 feet away are chattering about something irrelevant, it's harder to think. Stress levels go up. Tuning out ambient noise becomes a task in itself, creating fatigue," Anders wrote for Forbes.

Other experts worry that collaboration is more likely to cause groupthink than the next big idea.

"Most of us now work in teams, in offices without walls, for managers who prize people skills above all," said Susan Cain, author of "Quiet: The Power of Introverts in a World that Can't Stop Talking," as reported by Life Inc. "Lone geniuses are out. Collaboration is in."