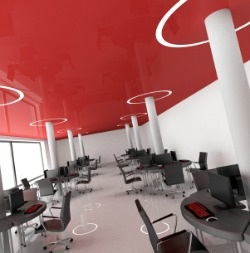 Zappos is doing it. Facebook and Google are, too. Open, collaborative office spaces may be catching on, and with gusto. The philosophy behind them may be simple enough, too: create a space that encourages worker collaboration and wait for the creativity to flow. However, the real question may be whether they work.

Maybe not−at least not without some tweaking, says a new study from the global design and architecture firm Gensler. Given that as many as 77 percent of businesses may be considering making the switch to collaborative offices, according to SmartPlanet, questions about their effectiveness may be worth consideration. The new survey from Gensler evaluated the effect that varying office set-ups had on collaboration, learning, socializing and overall effectiveness of the workplace. The verdict: offices that have veered too far toward the open concept may actually undermine productivity, performance and creativity. By contrast, those who work for companies that set space aside for independent focus perform better (14 percent), are more innovative (31 percent) and are more satisfied with their work (31 percent). They also report being more collaborative (57 percent).

If you feel as though your workspace could use some tweaking, you are not alone. According to the survey, only one in four Americans work in what Gensler considers to be "optimal" office spaces. And what does that look like? According to the results, successful office spaces support focus and collaboration, providing opportunity for both. Overall, those working in this "balanced workplace" report being better focused, more collaborative and more satisfied with their jobs. The results may be significant since, according to Gensler, workplace productivity has actually declined since 2008.

"Our survey findings demonstrate that focus and collaboration are complementary work modes. One cannot be sacrificed in the workplace without directly impacting the other," Diane Hoskins, co-Chief Executive Officer at Gensler, said in a Gensler press release. "We know that both focus and collaboration are crucial to the success of any organization in today's economy."

The new Gensler research is not the first to suggest that open-space offices can have a negative impact on employees. Previous studies have indicated that the lack of privacy in this set-up can boost conflict, increase workers' blood pressure and lead to more turnover.

Office Today notes that an office's physical layout is not the only factor that can influence productivity, creativity and collaboration: flexibility also plays a role. According to the Gensler study, respondents whose companies offer flexibility are happier with their jobs compared to those with more rigid policies, and are more focused and collaborative. A more flexible work policy does not necessarily translate into more telecommuters, either. In fact, workers who are free to choose where they work still spend at least 70 percent of their time in the office, according to the press release.

"This is not about mobility," said Hoskins. "Our research indicates that employees will leverage autonomy for optimal productivity when given the choice in where and how to work as well as the technology and infrastructure to support their choice."