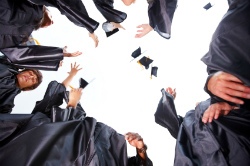 The Oregonian reported that the state House of Representatives passed Senate Bill 253, which would revise the state's current mission of higher education to include meeting a set of goals by 2025. The goals include: having at least 40 percent of adult Oregonians obtain a bachelor's degree or higher; at least 40 percent obtain an associate's degree or postsecondary credential and 20 percent earn a high school diploma or equivalent. The Chronicle of Higher Education noted that the measure sets an ambitious goal as U.S. Census data shows that, currently, 28 percent of Oregonians 25 and older have at least a bachelor's degree, while just eight percent hold an associate's degree.

According to the Oregonian, the bill passed 46 to 14. It now moves to Governor John Kitzhaber, who is expected to sign it into law.

Representative Michael Dembrow (D-Portland) praised the bill, saying that it would encourage policies to improve higher education, such as bills to lower the cost of textbooks and to make it easier for community college students to transfer to four-year institutions.

Dembrow also added, "If you can never set goals, you can never achieve them." As pointed out in the Joint Staff Measure Summary, the current statutes do not set any numerical goal nor do they establish measures of accountability.

Some, however, argued that simply setting a goal is not enough and that the state does not have the proper infrastructure to meet such a demanding goal. Representative Mitch Greenlick (D-Portland) argued that if the Legislature were serious about raising college completion rates, "we should be increasing the higher education budget dramatically in this session. Instead, the intention is to adopt this as an aspirational goal instead of doing something and putting it under our pillow and hoping the tooth fairy will deliver on this objective."

Representative Wally Hicks (R-Grants Pass) agreed, adding that "serious introspection and serious change in the near term" is necessary in order to meet the goal.

In April, the Oregon House also passed House Bill 2732, which would require graduating seniors to provide proof that they are seriously thinking about life after high school by either applying to a postsecondary school, submitting an application for the U.S. armed forces or attending orientation for a training or apprenticeship program.