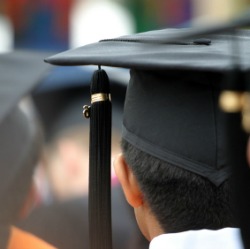 High school graduation requirements vary by state and district, and though education experts may debate whether some of them meet their intended purpose -- especially where any kind of testing is concerned -- most serve a common goal: To ensure students walk away adequately prepared for their futures. In the case of one small Oregon school district, however, an unprecedented graduation requirement proposal has many parents and community members questioning whether the district is taking the goal of preparing students for the future to an impractical extreme.

Last month Corbett School District Superintendent Randy Trani proposed a very unique graduation requirement for all students passing through its highly acclaimed high school, reports The Huffington Post: Beginning in 2017, all students must be accepted by a college to graduate. Trani said the proposal -- which is expected to pass easily this December -- would ensure all Corbett High School graduates leave its halls with sufficient life options.

"We want to be sure a kid doesn't make an unwitting choice in plans at age 15 that will affect them at age 18," Trani told The Oregonian. "We're aiming at kids who may need an aspiration."

The Oregonian notes that Trani's proposal has been warmly received by most on Corbett's school board, but not all. Board member Annette Calcageno told the publication she believes the proposal exceeds the district's boundaries.

"We're overstepping our bounds into the parent realm," Calcageno told The Oregonian. "So many times, schools have acted in ways that say, 'We know better than parents.' Well, no. These are family choices, personal choices for the student."

There is another reason Calcageno and others question the proposal. Some, including Calcageno, have suggested that the measure is designed to improve the school's national rankings rather than to meet student need, and that this is not the first time Trani has taken such steps. Gawker reports that in 2005, for instance, Trani and Corbett High School Principal Phil Pearson launched a policy dubbed "AP for All" that required all students to take at least six Advanced Placement courses in order to graduate. The move catapulted Corbett near the top of a popular high school ranking list published annually by Newsweek since the publication weighted AP class participation heavily into its ranking formula. By 2009, Corbett ranked eighth among "America's Best High Schools," and moved even higher -- to fifth -- the following year. Then, in 2011, Newsweek's methodology changed to emphasize graduation rates and college acceptance, causing Corbett High to fall dramatically in the rankings. By 2013, it had fallen to 58th.

Some community members, including Calcageno and The Oregonian Editorial Board, suggest that the new proposed graduation requirement is an attempt by Trani to bring Corbett High School back up the Newsweek ranks. Trani has denied these accusations and contends that the move serves the students alone.

"This is just one step among many we've been taking for 10 years," Trani told The Oregonian. "We want to make this change so kids have more choice."

Motives aside, Gawker reports that some Corbett parents and students have other reservations about the proposed change. Corbett freshman Colin Horn said he worries the requirement might prompt some of his classmates to aim lower, taking easier classes that result in better grades to ensure they are accepted by a college.

"Why require people to be accepted?" Horn told Gawker. "I think it should be a rule to apply, but not get accepted."

Trani has noted that the new requirement would not actually stop one from graduating, notes The Huffington Post, because Oregon community colleges admit all in-state high school graduates who apply.