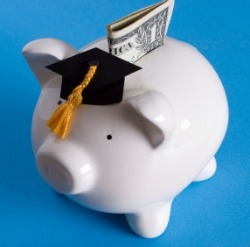 Earlier this week, Oregon's Senate passed a bill already approved by the House of Representatives for creation of a pilot plan for tuition-free college. Under "Pay it Forward, Pay it Back," students would draw from a newly created fund to attend public universities in the state, potentially avoiding traditional lenders and interest rates, The Wall Street Journal reported. Then, after graduation, students would pay back into that fund annually based on their income, one proposal being 3 percent of wages for 24 years for bachelor's degree holders. Those who don't graduate still would pay into the fund, an amount based on the duration of their school attendance. The state legislature is scheduled to decide in 2015 whether or not to execute the pilot.

"We have to get way out of the box if we're going to get serious about getting young people into college and out of college without burdening them with a lifetime of debt," said Mark Hass, a state senator (D.) from Beaverton, Ore., head of the chamber's education committee and supporter of the bill.

Initially, the state likely would borrow money to start the fund, a minimum of about $9 billion, but the hope is the fund would become self-sustaining.

The idea burgeoned when a class at Portland State University called Student Debt: Economics, Policy and Advocacy last fall was connected with the Economic Opportunity Institute, a Seattle, Wash., nonprofit think tank that had studied the no-tuition concept, The New York Times noted. The students adopted the idea as a class project. They and their instructor presented it to state lawmakers who then conducted hearings on the plan, debated amendments and passed the bill (unanimous in both the Senate and House). Oregon Governor John Kitzhaber is likely to sign it, an aide said.

"When we talked to legislators, conservatives said it appealed to them because it's a contract between the student and the state, so they see it as a transaction, not as a grant," said Nathan E. Hunt, one of the students in the class.

Australia and the United Kingdom have income-based repayment programs in place, but no U.S states do. However, lawmakers in Washington, New York, Vermont, Pennsylvania and California are interested in the model, EOI's executive director John Burbank told The Wall Street Journal.

"If it's done correctly, it's essentially creating a social insurance vehicle for enabling access to higher education," he said.

According to Parade, one wonders how many people would choose to partake in such a plan, especially those interested in less lucrative careers. While the idea is tempting, having to pay back a portion of one's salary after graduation could be a burden.