Oregon Students Allowed To Use Spell Check On State Exams 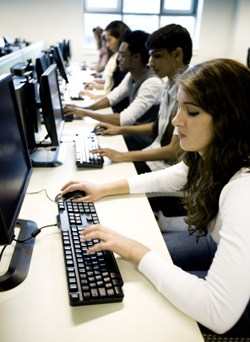 A recent decision by the Oregon Department of Education has raised some concerns among teachers and students alike. For the first time, Oregon public schools will allow students to use spell check on state writing exams.

OregonLive.com reported that school district administrators and teachers did not take the matter lightly. State writing tests have used traditional paper and pencil for years and it took officials nearly a year to decide whether students should be allowed to use spell check. Officials also noted that students have always been able to use dictionaries and other spelling tools when completing a handwritten test.

While many school districts argued that spell check would hinder students and put them behind their peers in other states, others said the change would help officials focus on assessing students' writing skills rather than concentrating on typos. OPB reported that last year Parkrose High School students actually scored lower on online writing tests because of simple typos.

OregonLive.com noted that the system would only point out misspelled words, not automatically correct them. Students would be presented with several options on how to correct the error. Furthermore, it would not catch misused punctuation, grammatical errors or incorrect uses of homophones.

"Students must still know how to recognize a correct word and correct spelling," said Tony Alpert, director of assessment at the state Department of Education.

Like most officials, students have mixed reactions towards the use of spell check, noted OPB. Max Denning, a student at Parkrose High School, said spell check has become so commonplace that it just makes sense to have access to it on tests.

Other students disagreed, reported NPR. "If we constantly use spell check, then what about when we get in situations like [the SATs]? When we don't have it, we'll get completely confused and maybe even fail it, because [spelling is] one of the parts that they grade you on," said junior Ashley Smith.

To add to the debate, many schools do not have enough computers for test takers, putting some students at an unfair disadvantage. In Portland, for example, only one-quarter of students will be able to take this year's writing test online.

"We do have an issue with capacity and access to technology in our schools," said Castillo to OPB.

NPR reported that education officials will pay close attention to this year's test results to see if there is a difference.

"Lack Of Computers May Limit Use Of Spell-Check On State Tests," news.opb.org, January 7, 2011, Rob Manning