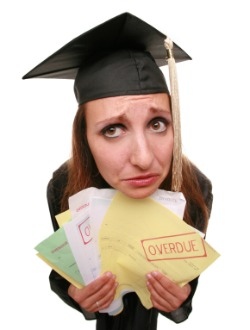 Pardini opined that student loans are the next credit bubble, with borrowers, not the lenders, being the losers. The total of outstanding student loans is on pace to surpass $1 trillion this year, according to the Federal Reserve Bank of New York.

The College Board also reported that the amount students are borrowing is more than twice that of a decade earlier, after adjusting for inflation. Furthermore, total outstanding student loan debt is now double that of five years ago. Full-time undergraduate students borrowed an average $4,963 in 2010.

The burden of this debt lies on the shoulders of the country's young people, who will begin their adult lives deeply in debt, ultimately slowing the overall economy.

"Students who borrow too much end up delaying life-cycle events such as buying a car, buying a home, getting married (and) having children," Mark Kantrowitz, publisher of FinAid.org, told USA Today.

The number of borrowers in default (more than nine months behind in payments on their loans) also increased to 8.8 percent in 2009 from 6.7 percent in 2007.

In addition, several student loan holders aren't as far behind but are still in arrears, noted TIME. A report issued during the summer showed the student loan delinquency rate, which is when loans are 90 days past due, was 11.2 percent. This means that more than 1 in 10 borrowers were three or more months behind in their payments.

"Federal student loans are like no other loans," said Alisa Cunningham, research chief at the Institute for Higher Education Policy, USA Today reported. "The consequences are so high for making a mistake."

As noted by Politico, the report's findings validate recent Occupy Wall Street protests. Various frustrations have fueled the movement, but one of the most voiced is that of overwhelming student loans.

"I have about $75,000 in student loans. I will default soon. My cosigner, my father, will be forced to take my loans. He will default as well. I've ruined my family because I tried to rise above my class," wrote one individual on the 99 Percent website Wednesday, one of the places that sparked the Occupy Wall Street movement.