Overeating? You May Be Burned Out At Work 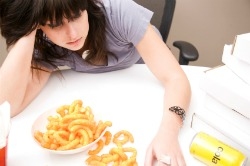 When it comes to eating and consuming extra calories while on the job, stress at work can play a significant factor, at least for women.

A new study published in the American Journal of Clinical Nutrition revealed that women who had job burnout were more likely to engage in "emotional" eating as opposed to eating related merely to hunger, reported Reuters. Additionally, they were more likely to experience "uncontrolled" eating or the inability to stop downing food until it was gone.

"Those experiencing burnout may be more vulnerable to emotional eating and uncontrolled eating and have a hindered ability to make changes in their eating behavior," said Nina Nevanpera, of The Finnish Institute of Occupational Health, which conducted the study.

Some 230 employed women age 30 to 55 were surveyed for the study, according to Reuters. Twenty-two percent reported having burnout prior to the start of the study. Furthermore, this group of women were more likely to have issues related to emotional and uncontrolled eating than women who were not experiencing burnout, according to CNN. In fact, women who did not report experiencing burnout, reported a decrease in uncontrolled eating over a 12-month period.

The study, however, did not take into consideration a number of factors that might have resulted in more obvious conclusions: participants' weight history and whether they had changed their eating habits recently, for example. Also, CNN noted that some people actually eat less food, instead of more, when they are stressed out.

"This really ties in to the growing body of research looking at the 'medication'-like properties of food in some cases, their impact on neurotransmitters in the brain, and also the interaction of the hypothalamic/adrenal(stress)/pituitary access and weight control," said Dr. Melina Jampolis, a physician and nutrition expert for CNNHealth.com.

Also of note was the fact that the weight difference between those with burnout and those without was not significant. In fact, nearly half of those with burnout were of normal weight. This could be due to the likelihood that the women who were burned out generally obtained a higher level of education and higher education tends to be associated with lower weight, Nevanpera explained in Reuters.

The outcome of the study seems to be that women should be given coping mechanisms to help them deal more effectively with stress on the job from the start.

Dr. Meagan Mohammadione, of the Emory Bariatric Center in Atlanta, agreed. Though she was not involved with the study, she told CNN, "The emotional eating, it hits very quickly. Your response to it has to be very quick as well."

Career and Education News
Home >
News>
Overeating? You May Be Burned Out At Work