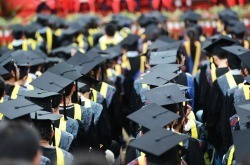 Puff Daddy. P. Diddy. Swag. Music mogul Sean Combs has gone by many names, and now, according to The Washington Post, he can add one more to the mix: Doctor. This weekend, the star received an honorary degree from Howard University, where he delivered what the Post called a "thoughtful, funny and, surprisingly, sentimental" commencement speech, despite controversy surrounding his selection.

Entrepreneur, philanthropist and music star Sean Combs delivered his commencement address before 2,600 graduates on Saturday, reported a PRWeb press release. Combs attended Howard but left the school before earning his degree -- a point he did not skirt around in his speech.

"Only this family could take one of its sons who already had three name changes and give him a fourth -- Dr. Sean Combs," said Combs, as reported by The Washington Post. "It's good to be home. I am humbled to be in such great company."

The fact that Combs left Howard before completing his education was a point of controversy when the school announced its selection for this year's address. Many students alleged he was a poor choice because he dropped out before completing his education. Nonetheless, Combs led what the PRWeb release characterized as an "energetic" crowd in the famous Howard spirit chant, "HU. You Know."

"I know there was a lot of drama because he didn't graduate," graduate Katherina Brown told The Washington Post. "But he was funny and entertaining and kept a smile on our faces."

Combs acknowledged that there were several times he regretted not finishing his degree. He said if he didn't leave early, he "would have been more prepared." He recalled being fired from his first job as a talent director at Uptown Records in the 1990s. His girlfriend was 8 ½ months pregnant, and he had just purchased a home in Arizona that he could not afford. Combs said he could have "let the darkness swallow him" but instead decided to "be (his) own light." He encouraged graduates to follow his lead.

Combs' passionate speech was one of many commencement addresses that drew national attention this weekend, reported ABC News. First Lady Michelle Obama spoke before Dillard University, where she encouraged graduates to "stay hungry for education," and to "let that hunger be our North Star." Vice President Joe Biden delivered his own address at the University of South Carolina, where he called this newest generation of graduates the "most competent, capable," and "caring" in American history.

Perhaps one of the most groundbreaking speeches, however, was delivered by NASA astronaut Rick Mastracchio for his alma mater, the University of Connecticut. It was not so much the content of his speech that made headlines, noted ABC News, but rather its (literally) out-of-this-world venue: Mastracchio spoke while orbiting 260 miles above Earth, inside the International Space Station.

"I probably have the best job on and off the planet," said Mastracchio.