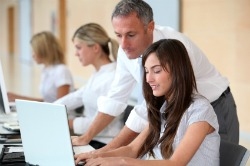 A new study has found that employers expect to hire 8.5 percent more college interns this summer, and nearly all will be paid positions.

"This reflects the focus of these internship programs," remarked Marilyn Mackes, executive director of the National Association of Colleges and Employers, which conducted the survey, in a press release. "Employers taking part in the survey use their internship programs to feed their full-time hiring efforts; as a result, they pay their interns to ensure the best talent pool possible."

The results of the study were based on a poll of 280 NACE member organizations between November and January. In all, the survey found that businesses plan to hire over 40,000 interns this year; last year, the number was about 36,900. The average pay for summer interns is expected to be $16.21 an hour, a slight drop from the 2011 average of $16.68.

Some career experts cautioned that a rise in summer internships is not necessarily a positive trend. In an interview with The Wall Street Journal, Eileen Appelbaum, a senior economist with the Center for Economic Policy Research, noted that interns and temporary employees allow firms to increase production without adding permanent expenses such as healthcare and other benefits.

"Given the way the labor market is, I wonder if this is not just a form of inexpensive recruiting," she told the Journal.

There is reason to believe, however, that internships may indeed pave the way to permanent jobs: A different study conducted by NACE found that nearly 90 percent of students who participated in internships would accept an offer of a full-time job from their internship employers. The same study also found that paid interns were more likely to receive a job offer, have a job in hand by the time they graduate, and receive a higher starting salary than those who had an unpaid internship or no internship at all.

In any case, many college students would probably agree that paid internships are far better than unpaid internships. "What's worse than a student slaving away an entire summer -- day in and day out -- just to put something creditable on his or her resume?" asked an article in The Harvard Crimson. "Not getting paid for it."

A column in The Cornell Daily Sun reiterated the sentiment. "The fact remains that many unpaid internships are bereft of any educational value or training," noted the article. "Instead, they serve to provide companies with free labor to perform mundane tasks."

"Money for Nothing and Interns for Free," cornellsun.com, February 29, 2012, Jon Weinberg

"The Bane of Unpaid Internships," thecrimson.com, February 21, 2012, Julian A. Lopez