P.E. Requirements at Universities on the Decline 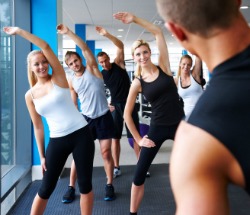 The number of four-year universities that now require physical education courses is at an all-time low, a new study published in the journal Research Quarterly for Exercise and Sport shows. Additionally, the number of PE classes available at the collegiate level are dropping, making it harder for students who are interested in PE classes to find options for physical activity, and taking the focus away from health and exercise on college campuses.

"Students are really missing an opportunity to learn skills for a healthy life," said Dr. Brad Cardinal, lead study researcher and a professor at Oregon State University's Department of Nutrition and Exercise Sciences.

To assess PE offerings available in college, Cardinal and his team looked at 354 four-year institutions, excluding professional schools and seminaries, Daily Rx reported. They looked at what health, wellness, and PE programs were in place at these institutions, and what types of credit they offered for athletic courses.

They discovered that PE course offerings have declined significantly among universities over the years. Only 39 percent of four-year institutions required their students to take PE courses in 2010, compared with the nearly 66 percent in the 1980s and 90s and an impressive 97 percent in the 1920s, according to USA Today. Among the schools that did not have a physical education requirement, approximately 90 percent made PE ineligible for elective credit.

Many researchers see the trend away from PE as illogical, given the country's high rates of obesity, inactivity and related medical problems. They argue that students could gain a lifelong benefit from health and fitness education.

"There is a remarkable disconnect in that we fund research as a nation showing that physical activity is absolutely critical to academic and life success, but we aren't applying that knowledge to our own students," Cardinal said, as reported in The Huffington Post.

The study did not look at the reasons behind the nation's disappearing PE classes, but researchers believe that shrinking budgets and a greater focus on academics may be at play. Some schools are also decreasing the number of classes that students must take that are not related to their field of study; this development is a result of the greater emphasis that schools and students are placing on graduates' careers rather than their life skills, said Steve Mitchell, president-elect of the National Association for Sport and Physical Education, to USA Today.

"Students and parents are less willing to pay for things that are outside their immediate academic disciplines," he said.

Some schools are seeking to make a compromise between encouraging physical activity and increasing their focus on academics. The University of Chicago recently dropped its requirement that students pass a swim test and complete three credits of PE. As a result, the school was able to eliminate student fees associated with some classes such as core-training and Zumba.

Career and Education News
Home >
News>
P.E. Requirements at Universities on the Decline