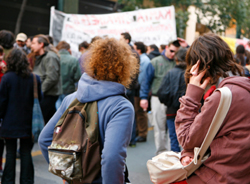 Students across Pennsylvania staged protests on Tuesday in the wake of Gov. Tom Corbett's proposal to cut state funding in half, which would mean a 15 percent reduction in the total budget for state schools, reported the Centre Daily Times.

Temple, Penn State, the University of Pittsburgh and Lincoln University are among the state schools earmarked for the budget reduction, noted StateCollege.com.

Lock Haven University was one school where faculty and students gathered to demonstrate their opposition to the governor's plan, noted the Centre Daily Times. Mark Cloud, a psychology professor and chapter president of the Association of Pennsylvania State College and University Faculties, told the crowd that the association is bargaining in good faith by endorsing a one-year salary freeze, and that the state has to do its part as well to make concessions.

According to the Pocono Record, Corbett announced that state funding for higher education would be reduced from $465 million to about $232.5 million.

For East Stroudsburg University (ESU), the governor's plan means a $15.5 million cut, which will result in the eradication of hundreds of class sections, the loss of up to 80 faculty members, double-digit tuition hike percentages, and increased class sizes, ESU's faculty union president, Nancy Van Arsdale, told the Pocono Record.

Pennsylvania joins Nevada, California, Florida and Illinois in facing vast shortfalls in state budgets as officials brought into power during mid-term elections promised not to increase taxes even as federal stimulus money runs out this fiscal year. On Monday in Nevada, the largest student protest in the state's history was held over the proposed cuts in higher education for that state.

For now, it appears the governors are sticking to their respective pledges to target higher education as a line item that can sustain severe spending reductions.

"We have a budget hole of $4.1 billion. We could do nothing. We could continue to spend at the rates we've been spending for the past eight years -- and that $4.1 billion hole, by 2015, will be a $23 billion hole. ... Some tough choices were made," said Pennsylvania Lt. Gov. Jim Cawley, as quoted by StateCollege.com.

According to the Centre Daily Times, another rally to protest higher education cuts is planned for Monday in Harrisburg. Leaders of Penn State and the other state-related universities are slated to appear before the House Appropriations Committee.