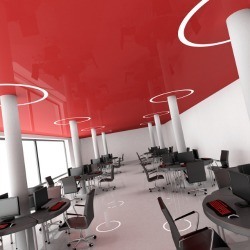 Silicon Valley tech companies are known for their posh, high-tech and amenities-packed campuses, and if recently revealed plans are any indication, Facebook's upcoming 435,000 square-foot office building decked out with rooftop parks, cafes and barbecue areas is no exception. The space, coined the "hacker campus," will even set a record for being the largest open office space in the world, reports The Daily Mail, keeping with Facebook founder Mark Zuckerberg's mission to make the world "a more open place." There is just one problem: Studies show these open offices may actually kill productivity, and probably make workers sick.

The Daily Mail reports that Facebook commissioned architect Frank Gehry to design a new office space for some 2,800 engineers at its Menlo Park, Calif. headquarters. This week the firm unveiled its plans for the new space, which spans 22 acres and includes underground tunnels to the company's current campus. The building will feature parks and barbecue areas on the roof, and is designed to rise and fall with the natural landscape.

"The roof of the building will be a park that blends into the community with a long walking trail, a field and lots of places to sit," Zuckerberg said at the reveal, as reported by The Daily Mail. "From the outside it will appear as if you're looking at a hill in nature."

Of note is the new building's open office design, which, The Daily Mail reports, puts all of these engineers to work in what is essentially one giant room. Zuckerberg said that the open layout will bring these thousands of employees "close enough to collaborate together." According to a series of studies recently outlined by The Atlantic, however, these open spaces may bring more harm than good.

The Atlantic reports that despite their popularity -- about 70 percent of Americans reported working in open office layouts in 2010 -- open offices can undermine employee morale and productivity. A 2002 longitudinal study of Canadian oil-and-gas company employees who moved from traditional to open offices reported being significantly less satisfied with everything from work environment to colleague relationships to personal performances, and other studies have found a similar trend. There are may reasons why open offices could be counter-productive, like lack of privacy and noise pollution. One study even found that the lack of windows such layouts afford could be problematic since workers without access to that natural light sleep an average of 47 fewer minutes each night, and had poorer sleep quality over all.

The windows study cited by The Atlantic is not the only one to suggest open office layouts could be harmful to employees' health. The Wall Street Journal reports that another study published in the journal Ergonomics last month found that open office workers may get sick more often than those with private spaces. Authors speculate that the increase in illness could be attributed not just to the ease with which germs can spread in close, packed quarters, but also by environmental stressors, like having less personal control of their surroundings.

What is an employer to do? According to The Atlantic, all the studies it reviewed suggest that the ideal office space is more or less the antithesis of open offices: Private offices with lots of windows that allow workers to control their environments. In the mean time, The Daily Mail reports that other major tech companies like Apple and Amazon are planning their own blockbuster office spaces, though it is unclear whether they will follow Facebook's open space precedent.

"Now that's an open plan office: New pictures reveal Facebook 'hacker cave' that will house 2,800 workers in ONE room - and there's even an underground tunnel to get in and out," dailymail.co.uk, March 20, 2014, Mark Prigg, http://www.dailymail.co.uk/sciencetech/article-2584738/Now-THATS-open-plan-office-New-pictures-reveal-Facebooks-hacker-campus-house-10-000-workers-ONE-room.html