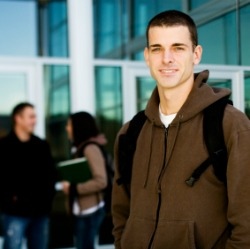 The percentage of 18-to-31 year olds, or Millennials, living with their parents spiked in 2012 at 36 percent, the highest the rate's been in at least 40 years, according to a new Pew Research analysis of U.S. Census data. This compares to 32 percent in 2007, or pre-recession, and 34 percent post-recession in 2009. Last year, a record 21.6 million young adults lived in their parents' home, versus 18.5 million in 2007. Between one-third and one-half of millennials living at home were college students (for the study, the Pew Research Center categorized students residing in the dorms as living with their parents).

"Most of my friends that have graduated end up living back home because even if they have a job, they can't afford to pay rent and pay back their loans at the same time," Stephanie Levonne, a 20-year-old college student living at home, told CBS News. "I know a lot of people that took out almost half or more of their tuition in loans which is $50,000 so it's impossible to pay rent and live in New York City while paying off your loan."

Part of the increase in Millennials living at home is attributed to increased college enrollment among this age group, the Pew Research Center noted. According to the Pew Research report, 39 percent of Millennials ages 18-24 were enrolled in college in March of 2012, up from 35 percent in 2007 for this same age group. The struggling economy also contributed to the rise in Millennials residing with their parents; in 2012, only 63 percent of individuals ages 18-31 held a job, down from 70 percent in 2007 for this same demographic.

"Students can't afford to live on their own when they graduate college," Susanne Bleiberg Seperson, director of Dowling College's Center for Intergenerational Policy and Practice, told Long Island Newsday. "They're getting stuck in time, held back from moving forward."

The third significant reason that the Pew Research Center's report found was a drop in marriage, which is possibly due to the economic downturn. Last year, 25 percent of Millennials were married, a 5 percent drop from the 30 percent in 2007. However, "[I]t's clear other factors are at work," Richard Fry, the report's author, told Newsday. Fry noted in the Pew Research Center report that even if employment, college enrollment, and marriage rates among Millennials remained the same, an increase in Millennials living at home would have still occurred, indicating a potential cultural shift towards more acceptance of living at home.

About Pew Research's findings, Seperson told Newsday, "The short version is it's the economy. There are no jobs."