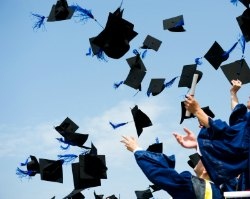 A new report conducted by the Pew Research Center indicates that a record share of young adults have attended and completed college. According to the report, for the first time ever, one-third of the nation's 25- to 29-year-olds have completed at least a bachelor's degree. The Center noted that this trend runs contrary to predictions of a decline in educational attainment among some demographics. Now, college completion is at a record high among men and women; black, white, and Hispanic citizens; and both foreign- and native-born Americans.

The Pew Research Center report suggests that changing public attitudes about the importance of higher education in an increasingly knowledge-based labor market may have played a role. According to the report, a 1978 Pew Research Center study showed that the public was evenly divided over whether college education was necessary "to get ahead in life," compared to 73 percent in 2009.

The New York Times reported that until 1992 the U.S. was the worldwide leader in educational attainment, but many European countries began producing degree-holders at a higher rate thereafter. This led some education experts to proclaim the U.S. was experiencing an "education reversal," in which older Americans were more educated than younger ones. The new Pew Research Center report suggests that the reversal trend is no longer the case. In fact, overall, the increase to a third of the nation's 25-to-29-year-olds having a bachelor's degree is up from 20 percent in the early 1970s.

However, despite these new gains, opinions remain mixed about whether rising student debt undermines the value of a degree, noted USA Today. Just 57 percent of the 3,000 Americans surveyed by Country Financial this summer considered college to be a good investment -- a decrease from 81 percent in 2008.

On the other hand, educational gains among U.S. workers could pay off, both in terms of earnings and employment potential, according to The New York Times. Anthony Carnevale, director of the Georgetown University Center on Education and the Workforce, said the wage premium for those with college degrees has grown by 40 percent since 1983, and demand is on the rise, too.

Yet, the quality of a degree is also important. Mark Schneider, vice president for a non-partisan research organization called the American Institutes for Research, told USA Today that an increase in college degree holders means very little compared to the quality of education U.S. students receive.

"It's easy to graduate more people," Schneider told USA Today. "But we also need to make sure we're giving them a quality education."