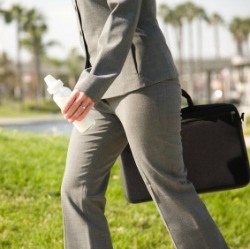 A new report shows that more mothers have become the primary or solo provider in households with children. This was not the case just a few decades ago, and the public seems to have mixed feelings about the growing trend.

Bloomberg Businessweek reported that a new study released by the Pew Research Center showed that a record 40 percent of U.S. households with children have mothers who are the top or only breadwinners. In 1960, just 11 percent of households had mothers who were the top earner. The data illustrates how much gender roles and the American family life have changed since the 1960s.

The study looked at both married and single working mothers -- two very different groups that have both grown larger through the years. Of the current 40 percent of mothers who now earn the majority of income in their household, 37 percent are married and 63 percent are single mothers. The Washington Post noted that the trend was most likely accelerated by the Great Recession.

"The decade of the 2000s witnessed the most rapid change in the percentage of married mothers earning more than their husbands of any decade since 1960," explained Philip Cohen, a University of Maryland sociologist who studies gender and family dynamics, in The Washington Post. "This reflects the larger job losses experienced by men at the beginning of the Great Recession. Also, some women decided to work more hours or seek better jobs in response to their husbands' job loss, potential loss or declining wages."

The Pew study found that women now make up 47 percent of the U.S. labor force. In 2011, the employment rate among married mothers with children was 65 percent, up from 37 percent in 1968.

The study also found that married mothers are becoming increasingly educated, which can have an effect on earnings. As Bloomberg Businessweek pointed out, of all households with dual-earners, 61 percent consist of husbands and wives with comparable education levels. Twenty-three percent of households reported wives with higher education and 16 percent reported husbands with a more advanced degree than their wives. Interestingly, the study highlighted that total family income was higher when the mother was the primary breadwinner. For instance, in 2011, for families in which the wife was the primary earner, median family income was $80,000. That figure is about $2,000 more than the median family income for households in which the husband was the breadwinner and $10,000 more than households in which couples earned the same income.

According to the study, the public acknowledges the financial benefits of more mothers in the workplace, but is concerned about how it may affect children and marriage. For example, two-thirds of surveyed adults said having a working mother makes it easier for families to live comfortably. However, 74 percent said it has made it harder to raise children and half reported that it has negatively affected marriages. Furthermore, while 79 percent of Americans said mothers should not return to the traditional roles of decades prior, 51 percent admitted that children are better off with a stay-at-home mother.