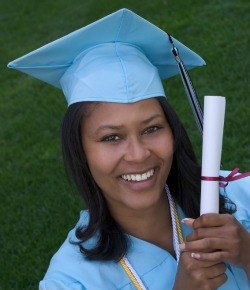 High unemployment rates along with the rising cost of college and growing student loan debt has caused many to question the college route. Despite the high cost, however, many studies have argued that a college degree is worth it, and a new report from the Pew Research Center shows that is indeed true, largely because the cost of not going to college is even greater.

According to The Wall Street Journal, the Pew Research Center surveyed 2,002 adults and analyzed U.S. Census Bureau data and found that the wage gap between college-educated millennials and those with just a high school diploma has steadily widened through the years. As reported by U.S. News & World Report, millennials ages 25 to 32 earned $17,500 more in 2012, on average, than their peers with just a high school diploma. To put that into perspective, the wage gap between late baby boomers when they were that age in 1986 was a little more than $14,200 and for early boomers in 1979, the wage gap was $9,690. For the silent generation in 1965, the wage gap was just under $7,500.

The Los Angeles Times noted that the Pew study found that while college-educated millennials are earning more, their earnings have increased very little through the years. Still, the wage gap has steadily widened because, at the same time, earnings among workers without some college education are decreasing. According to the study, in 2012, millennial workers with just a high school diploma earned a median income of $28,000, which is down from the $32,299 that comparably educated early baby boomers earned when they were that age. U.S. News & World Report pointed out that the median annual earnings for full-time working millennials with a four-year degree grew by about $6,700 from 1965 to 2013. At the same time, the median annual earnings for millennials with just a high diploma dropped by nearly $3,400.

Indeed, even when it comes to finding work, young high school-only graduates also have fewer opportunities than their more educated peers. As of March 2013, the unemployment rate among 25 to 32 year olds with only a high school diploma was 12.2 percent. Millennials with a college degree, on the other hand, had an unemployment rate of 3.8 percent and the rate for young adults with a two-year degree or some college education was 8.1 percent.

The Los Angeles Times pointed out that it is not surprising that the wage gap based on education has continued to widen, thanks to globalization and the erosion of unions. Additionally, the economy has become more service-oriented and specialized.

"That is one of the great economic stories of our era, which you could define as income inequality," said Taylor in The New York Times. "The leading suspects are the digital economy and the globalization of the labor markets. Both of them place a higher premium on the knowledge-based part of the work force and have the effect of drying up the opportunities for good middle-class jobs, particularly those that don't have an education."

While the big picture for four-year degree holders is not entirely positive, the Pew study shows that, compared to their high school-only peers, their outlook is much better.

"For today's young adults, the only thing more expensive than going to college is not going to college and that sort of captures the dilemma that many find themselves in," said Taylor in The New York Times.