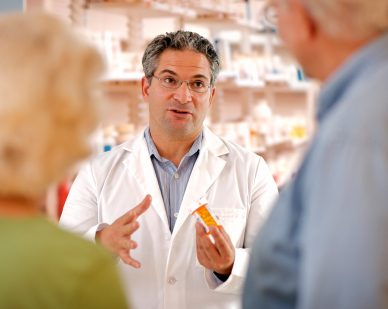 Like many other areas of health care, the field of pharmacy is growing rapidly. And, not just in the obvious way of increasing numbers of workers. Certainly, more trained pharmacists are needed to attend to the growing populations of elderly, chronically ill and newly diagnosed patients. But, more importantly, the nature of the work is changing and expanding. Lucinda Maine, PhD RPh, Executive Vice President of the American Association of Colleges of Pharmacy (AACP), says "I strongly encourage anyone with a bent for health care to consider pharmacy because that's where the action is."

Pharmacists are increasingly stepping in to fill the void of primary health care professionals. Maine explains the trend from her perspective of pharmacist education. She says that as physicians have become more specialized in their diagnoses, pharmaceutical colleges began to realize that they needed to prepare students to become medication use experts. Specifically, they needed to train future pharmacists to work more closely with primary care professionals to determine appropriate medicines and dosages for each patient.

Increasingly, and especially in integrated health care systems, physicians are now identifying patient goals and communicating them to pharmacists, who then develop the appropriate treatment plans. "The elderly, chronically ill people, and those with a single disease that needs constant monitoring are poster children for medication management by pharmacists," says Maine. "With 75% are all health care costs being spent to manage patients with chronic disease, we need to use our players to their maximum," she says, while also acknowledging the expanded capacity of pharmacists as more and more complete doctorates.

In fact, this trend is not new. According to Drugstore News, the National Association of Chain Drug Stores and the National Community Pharmacists Association have been leading a campaign for many years, educating the public, lawmakers and health care policy professionals about the role of pharmacists as frontline health care providers. Indeed, once health care reform legislation is passed, allowing reimbursement for certain kinds of medication counseling, pharmacists' jobs are likely to expand even more.

Recent research demonstrates the value of the changing role of pharmacists. Science Daily reports that when pharmacists directly participate in patient care, they significantly reduce treatment costs and improve outcomes. A study on diabetics conducted by the University at Buffalo (UB) School of Pharmacy and Pharmaceutical Sciences and published in the Journal of the American Pharmacists Association, found that after 6 months, clinical pharmacists in collaboration with primary care providers were able to significantly reduce the levels of one of the key indicators of glucose control.

Close collaborative relationships between physicians and pharmacists have not been the norm, but as a result of this study and others, UB pharmacists are working to make it so. "We know there's a long-term clinical and economic benefit to pharmacists working directly with patients and we think that can continue to grow," says Scott V. Monte, PharmD, UB clinical assistant professor of pharmacy practice and director of Diabetes and Cardiovascular Research, CPL Associates.

Toni Fera, PharmD, of HealthMapRx and the lead investigator of an analysis of multisite community pharmacy health management programs for diabetes patients, agrees. "Medication adherence is critical to the management of chronic diseases, and pharmacists are uniquely trained to help patients understand why they need to take their medications," she says in a MedPage Today article.

Pharmacy has not been immune to the effects of the recession. As in other fields, there has been a slowdown of job openings. For one, there is a supply issue. Trained and experienced pharmacists who were planning to retire or to leave their jobs to care for babies are continuing to work in order to make up for income lost by family members who no longer have jobs. In addition, according to Maine, pharmacists are retiring later than professionals in other fields. "A recent national survey indicated that many pharmacists are working well into their 70s and even their early 80s," she says.

And, there is a demand issue. According to a study by IMS Health, prescription drug sales grew only 1.3% in 2008, significantly less than in previous years, and pharmacists worked fewer hours. The Aggregate Demand Index for Pharmacists survey indicated a fairly large drop in hiring between March 2008 and March 2009. These declines are attributed to the economic downturn, with fewer people able to afford prescription medicine, especially as consumers lose jobs and health care benefits.

Increasing use of over-the-counter drugs

The University of Texas reports that there is an increasing trend for consumers to avoid pharmacies when buying medicines. Instead, they take over-the-counter (OTC) drugs and/or use alternative remedies, most of which are less costly. The number of users of OTC medicines is almost twice the number of people who consult a physician or use prescription drugs. And, the OTC drug market is growing rapidly due to development of new products and the fact that many existing powerful medicines are about to lose patent protection, rendering them easily available without prescription.

Renee Acosta, clinical assistant professor of pharmacy at the University of Texas worries about the trend towards self-prescribed health care, saying that it "could have profound implications, including abuse and worsening conditions that could escalate into major medical problems. She adds, "Those embracing self care may not have enough information to determine if their medical condition is right for self treatment."

In spite of these trends, Maine and other pharmacist specialists agree that the demand for pharmacies and pharmacists will come back as soon as the economy recovers. She refers to a New York Times article written by Aaron Edlin, law and economics professor at the University of California, Berkeley, andEDana Goldman, pharmacy and public policy professor and the director of the Leonard D. Schaeffer Center for Health Policy and Economics at the University of Southern California. The authors discuss the severe shortage of doctors and nurses in this country, predicting that the situation will get even worse once health care reform insures the 30 million Americans not currently covered.

In their recommendations addressing the heightened demand for professionals once there is health care reform, they say, "Pharmacists in particular are well-trained, accessible and knowledgeable, yet they have been left out of the health care debate. In many cases they could adjust chronic medications without a face-to-face visit to the doctor. Only the difficult cases need to be referred to the physician." If their suggestions are heeded, there will, indeed, be a large surge in the number of jobs for pharmacists.