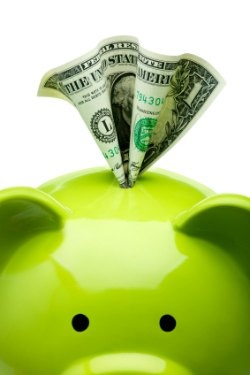 As college costs continue to climb -- leaving a record number of graduates in debt -- some students are looking for creative ways to manage their education expenses. One graduate student has found a way to make other companies cover most of his costs and that's through mail-in rebates.

Business Insider reports that Auburn University PhD student Jonathan Hood paid for most of his tuition this semester with mail-in rebates -- special promotions in which a company offers to refund you some or all of your purchase cost, so long as you mail in a rebate request form and receipt. According to Business Insider, most companies send these rebates in prepaid debit cards, though some use cash or checks. Hood stockpiled these funds and used them to cover his tuition.

Hood is not new to rebates; he discovered their potential hold when searching for Black Friday deals with his dad ten years ago.

"My dad kind of got me hooked," he told Business Insider. "We stood in line early in the morning and I found out then I could get the games I wanted for either really cheap or for free [with mail-in-rebates]."

Over the next several years Hood perfected his craft, covering many of his day-to-day expenses with rebates. He says he hasn't paid a cell phone bill with non-rebate earnings in two years, but paying off almost a full semester's worth of tuition may be his most impressive feat to date. Business Insider notes that almost all of Hood's rebate funds are from "free-after-rebate" offers, meaning he recoups the entire amount of his purchase.

Hood's creative means of funding his education may be impressive, but The Chronicle of Higher Education notes that it can be a labor-intensive process. Finding rebates and filling out the required paperwork takes time, and, according to Business Insider, Hood estimated that he entered between 200 and 250 prepaid debit cards into Auburn University's bill pay system. Rebates also require a great deal of planning as it usually takes weeks for companies to process applicants' paperwork and issue refunds.

Not everyone is prepared to follow Hood's rebate-hoarding example: According to The Huffington Post, many companies say they only offer mail-in rebates on the assumption that most people will not follow through with them: In 2006, about 40 percent of mail-in rebates were not redeemed or were denied because the submissions does not meet specific guidelines. Hood, on the other hand, is prepared. According to Business Insider, the full-time computer programmer developed a special computer program to stack outstanding rebates and alert him when they are past due.

"I've only ever lost one rebate," Hood told Business Insider. "The company went out of business."

Hood often resells the items he has purchased or donates them, and Business Insider says Hood is already hard at work raising rebate funds to cover next semester's tuition costs.

"Currently, [the fund] has $160 in it, but it will probably grow quite a bit in the next couple of days," he said in Business Insider. "I'm expecting about $600 more in rebates."