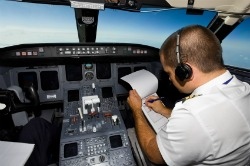 The Apple iPad has already begun transforming the classroom. Now it is changing the aviation industry.

According to USA Today, the lightweight tablet is being used in an effort to make airplane cockpits paperless. As part of the job, pilots lug around manuals and navigation maps that they use to review everything from routing information and company policies to airport parking. As MarketWatch pointed out, the paperwork can weigh 35 pounds or more. And as one can imagine, 35 pounds of paper can take up a lot of space in the cockpit and can be difficult to search through and keep organized midflight.

As a result, some airlines are leaving behind the paper world and opting for the thin 1.5 pound iPad, which can be easily stored and carried. PCMag reported that Alaska Airlines was the first airline to adopt the paperless method in May. According to USA Today, the company conducted a trial with 100 pilots and after being pleased with the results decided to give its more than 1,400 pilots a company-issued iPad.

"At first, like any of us brought up in the paper world, I was on the fence," said Stephen Lemley, an Alaska pilot who was part of the trial. "I knew where everything was in the manuals. But after about a month of playing with this, it became very apparent that this was the way to go." According to MarketWatch, airlines have been experimenting with various paperless methods since 2007.

"The tablets simulate what we do in the paper world, but makes it much easier to load the pages you want and not lose or misplace anything," said American Airlines Captain David Clark. "With the navigational maps, you can expand the image to see it more clearly, you can see pathways more clearly, and that can be an advantage at complicated airports like LAX."

Pilots also noted that the iPad gives them quick access to the most up-to-date information.

American and its parent company estimated that going paperless would lighten the cockpit, which could save about $1.2 million a year in fuel. Alaska estimated that approximately 2.4 million pieces of paper a year would be saved with its transition to the iPad.

USA Today noted that the device has played a role in other industries as well. It has replaced traditional menus at some restaurants and can be found in medical offices and hotels as well.

According to PCMag, the Federal Aviation Administration approved iPads with navigation materials for pilots for the entire duration of the flight, making it the first electronic device to be approved for use during takeoff and landing.