Political Engagement Among College Students At All Time Low 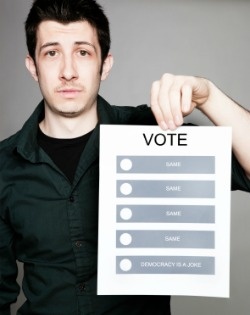 Two-thirds of college students lack civic engagement knowledge and skills, a report released Tuesday showed. It also made a case for colleges and universities to increase civic education and opportunities for political involvement at their institutions.

"Every student, whatever they're studying, needs a broad foundation for active and knowledgeable, engaged citizenship in a democratic society," Dr. Carol Geary Schneider, president of the Association of American Colleges and Universities, told Diverse.

In response to the report, "A Crucible Moment: College Learning & Democracy's Future," prepared by the National Task Force on Civic Learning and Democratic Engagement, higher education leaders joined several top Obama administration officials at the White House Tuesday to call upon colleges and universities to increase efforts to produce democratically-involved graduates. The event's theme was "For Democracy's Future: Education Reclaims Our Civic Mission."

The call comes at a time when political engagement among American college students is dramatically down, the Columbia Missourian noted. For instance, the report pointed out that the U.S. ranked 139th out of 172 world democracies in voter participation in 2007. The report's task force argued that the U.S. is at risk of becoming a "citizen-less democracy" where those unhappy with the status quo fail to get involved to effect change, reported Diverse. Seemingly, higher education schools have shifted their focus over time from citizenship to employment, said Eric Liu, a member of the National Task Force on Civic Learning and Democratic Engagement.

"In the last couple of decades, especially during the Great Recession, there's a real emphasis on the economic purpose of education," he added.

The report called for postsecondary schools to teach democratic principles along with political structures and systems, cultures and religions both at home and around the world, Insider Higher Ed reported. Furthermore, it urged them to develop partnerships with nonprofits, governmental agencies and business.

"...Civic learning needs to be an integral component of every level of education, from grammar school through graduate school, across all fields of study," the report indicated.

The primary goal stated in the report is to reach the statistical two-thirds of students by 2020.

To help colleges and universities in their efforts, the AAC&U plans to offer free online workshop resources on civic engagement in higher education this year, reported Inside Higher Ed. The American Democracy Project also plans to launch a civic health initiative centered on campus and community health.

"We are sending out the message that democracy matters and it is dangerous to keep democracy on autopilot," Schneider said in Inside Higher Ed.