Poll Shows Obama is the Favorite Among Young Voters 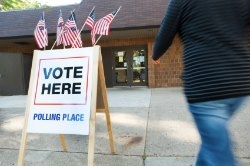 If the presidential election were held today, President Obama would have a lead of 17 percentage points over Mitt Romney among voters under 30, according to a new poll published by Tufts University's Center for Information and Research on Civic Learning and Engagement (CIRCLE). This age group, called "millennials," encompasses both college students and young adults, a demographic that helped Obama win presidency in the 2008 election.

"Young people don't have a separate set of special-interest points that have to be ticked off," said CIRCLE Director Peter Levine in the The Washington Times. "It has more to do with whether you reach them or not."

According to the poll, 52.1 percent of respondents said they would vote for Obama if the election were held today; 35.1 percent said they would support Romney. In addition, the proportion of young voters who say they are "extremely likely" to vote has risen nearly 10 points since July, while the percentage of those who are paying attention to the election has climbed by 15 percent.

The Washington Times reported that these results are on track with another poll released last week by the Institute of Politics at Harvard University, which suggests that Obama has a 19-point advantage among young people. The Harvard poll indicated a lower percentage of likely voters, however: Only 48 percent of respondents said they would "definitely" cast a ballot.

Campaign strategy may explain part of the decline, suggested Alexandra Acker-Lyons, director of the Youth Engagement Fund that commissioned the CIRCLE poll: "Both campaigns, to their credit, have done a great job of reaching out to young people," Acker-Lyons said in The Washington Times. "But from both sides, we're not seeing the same level of investment in young voters versus other electorates like women."

The Huffington Post noted that voters under 30 have been credited with helping Obama win the presidency in 2008: He carried two-thirds of the youth vote in an election that added 2.2 million more young voters than in 2004. Additionally, data from the Pew Research Center indicates that even with the decline in support, Obama still has greater support within this demographic than any other presidential candidate since at least 1980.

Whatever their eventual turnout, Acker-Lyons told The Washington Times that young voters are defying the stereotype that they are apathetic and disinterested. The CIRCLE results suggest that millennials have a strong sense of community involvement: Nearly 73 percent believe they have the power to change things.

"Politicians will really ignore this group at their own peril," said Acker-Lyons. "They have the numbers and the will and the engagement to really wreak havoc on the current political system and shake things up."

CIRCLE polled 1,695 potential voters aged 18 to 29 in July, and 1,109 of those same respondents in October. The group plans to publish additional findings this week, including those related to youth race, education and knowledge of state voting laws.