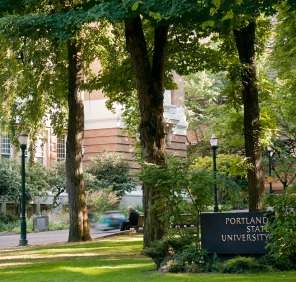 College tuition costs and student debt continue to be concerns for many students and their families. In an effort to alleviate those concerns, Portland State University has developed an opt-in program that guarantees students will graduate in four years, with a few key caveats.

According to Portland Business Journal, starting this fall, all incoming freshman can sign up for PSU's graduation guarantee, provided they meet a few requirements: students will have to declare a major at the start of freshman year, remain full-time students throughout all four years and maintain good academic standing. Additionally, OREGONLIVE reported that students cannot change their major, add minors or switch to another campus. The guarantee is not extended to transfer students who come to PSU after earning half of their credits at a community college, which is about half of PSU graduates. PSU Provost Sona Andrews also noted that many freshmen would not be eligible, as many often have to work while in school and, therefore, cannot take on a full load of 45 credits every year.

"Student debt is a big problem; it hurts students by making it harder for them to make a living after they graduate," said Wim Wiewel, PSU president, in the press release. "This guarantee will ensure students finish in four years and only pay for four years."

"Students in Oregon average between five and six years to get a degree that should take four years," said Wiewel in Portland Business Journal. "That means extra tuition, rent and books, which result in more student debt."

Matt Gianneschi, vice president of policy at the Education Commission of the States, told OREGONLIVE that the guarantee would also benefit the university. Gianneschi explained that having students declare their majors early on and ensuring that they do not switch majors helps the university better plan what courses to offer.

High school senior Aysia King told OPB that she thinks the added pressure to declare a major during freshman year is a good thing.

"If you don't decide as soon as you can, then you won't end up graduating within those four years, so I feel like that's pretty helpful for me," said King.

According to Portland Business Journal, Portland State is not the only college with a four-year guarantee. The University of Iowa, Iowa State and the University of Minnesota also offer similar pledges to their students. OREGONLIVE noted, however, that it is not known how many students participate in or remain eligible for such programs. Brian Prescott, director of policy research at the Western Interstate Commission for Higher Education, speculated that many students are unable to meet all the requirements.