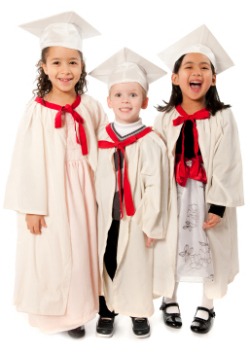 There's something about graduating and leaving college that makes us think that the current generation of students looks younger than we did. However, according to SmartMoney, college students are in fact getting younger. Much younger.

Because many college campuses are suffering from decreased state funding and parents are worrying more about their child's chances of getting into a good institution, pre-college summer programs have become more popular than ever before. For years, colleges have opened up their campuses during the summer to high school students looking to build their pre-college resume and hopefully gain an advantage over their peers. However, in recent years many schools have expanded or developed whole new programs to cater to students as young as kindergarten, reported SmartMoney.

According to North Carolina State University's website, the school offers a variety of pre-college programs that are specifically designed for younger students. For example, ninth through twelfth graders can take career-oriented programs in a variety of fields such as plant science and veterinary medicine, mathematics, science or design. Third through eighth graders, on the other hand, can take algebra camp, engineering or creative writing workshops.

SmartMoney reported that such programs have been overwhelming popular this year. A spokeswoman for North Carolina State University noted that applications for the school's summer engineering programs for elementary and middle school students has doubled, while Georgia Institute of Technology has received a record high 550 applications for their program's 375 slots. At the University of Virginia, some 1,200 students applied for a summer program that accommodates 790 students. Some applicants were as young as nine.

While many parents assume that starting their children on the road to college early on gives their kids an advantage when it's time to really apply, some experts say it is unclear how successful these programs are at achieving parents' goals. Katherine Cohen, a private admissions counselor and CEO of IvyWise, noted that colleges don't look at coursework prior to ninth grade. Jon Reider, director of college counseling at San Francisco University High School and a former admissions officer at Stanford University, said that a kid who spends a summer reading would be just as well off as a kid who attends pre-college camp.

The Sacramento Bee reported that this increased pressure to excel and build a pre-college resume has taken its toll on some students. Carol Curinga, a Davis Joint Unified School District high school counselor noted that while some students don't have a problem keeping up with a jam-packed schedule of rigorous classes, sports and other extracurricular activities, some students "are just nervous wrecks". Some experts believe the standards are too high, causing students to be stressed out and burnt out at a very young age.

Some parents, however, are not as obsessed with grades and college requirements, reported SmartMoney. For these parents, it's simply comforting to know that their child is in a trusted learning environment rather than sitting in front of the TV while they are at work.