Pregnancy Discrimination Still A Problem In The Workplace 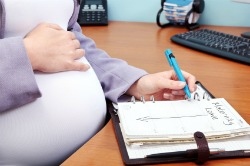 Workplace discrimination against pregnant women persists despite the passage of a law 30-plus years ago making it illegal.

The Pregnancy Discrimination Act of 1978 prohibits such discrimination, particularly when it comes to hiring, firing, pay, job assignments and promotions.

"A few employers have forgotten or never learned that it's against the law to discriminate against women because of pregnancy," David Lopez, the Equal Employment Opportunity Commission's general counsel, said during a federal hearing Wednesday, Life Inc. reported.

Over the past four decades, the number of women opting to work while pregnant has increased dramatically, an EEOC press release indicated. Further, BLS statistics show women currently comprise 47 percent of the nation's workforce.

Discrimination against pregnant women, present at all company levels, includes firing, demotions, decreased hours, forced unpaid leave, being denied a place to pump breast milk and gender stereotyping -- the idea pregnant women aren't as dedicated to their jobs or employers as their male and non-pregnant female coworkers, Reuters noted. This stereotyping likely causes the measurable "motherhood wage penalty" of up to 5 percent per child, said Stephen Benard, professor at Indiana University, in the EEOC press release.

Furthermore, "motherhood constitutes a significant risk factor for poverty," he said, adding that it's possible that "the gender gap in wages may be primarily a motherhood gap."

Women in low-income jobs tend to experience the worst discrimination, according to Life Inc. Oftentimes, they're denied small, helpful workplace accommodations such as being able to carry a water bottle or sit on a stool rather than stand.

Workplace pregnancy discrimination was spotlighted two weeks ago when a Texas federal judge ruled against a Houston mother who claimed she was fired after asking for somewhere to pump breast milk.

"This many years after the Pregnancy Discrimination Act, we still have employers who still don't understand the basics. Are we getting the word out on fundamental issues?" EEOC Commissioner Constance Barker said in Reuters.

As reported by Life Inc., the agency is taking a broad approach to combating pregnancy discrimination in the workplace and plans in September to release prevention guidelines in a four-year strategic plan. The EEOC continues to conduct outreach to ensure employers fully understand the law. Also, it's increasing the number of cases it files against employers -- in 2011, the total was 20.

"Employers should not make decisions based on stereotypes and presumptions about the competence and commitment of these workers," said its commissioner, Stuart J. Ishimaru, in the press release. "EEOC will vigorously enforce the anti-discrimination laws as they apply to pregnant women and caregivers."