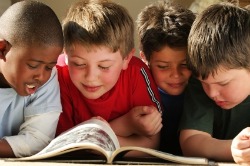 On Monday, President Obama called on Congress to revamp the "No Child Left Behind" law before September, then outlined his ideas for education reform. "I want every child in this country to head back to school in the fall knowing that their education is America's priority. Let's seize this education moment," he said, according to the Chicago Sun-Times' transcript of the President's speech.

His comments were part of a speech he delivered at Kenmore Middle School in Arlington, Va., which was the third in recent weeks. All three talks are part of what the White House has dubbed Education Month, according to First Read from NBC News.

Obama said good jobs require good schools. He argued nearly 50 percent of the jobs created in the next 10 years will call for a college degree or advanced training, reported the USA Today.

According to the USA Today, Obama went on to say that while The George W. Bush-era education law, officially the Elementary and Secondary Education Act (enacted in 2002), has the right goals, it does not provide teachers and parents the tools needed to achieve them. He envisions a new education law that would give more control to local and state governments, demand higher standards and improve the quality of testing. It also would incentivize improvement, use sophisticated measurement tools to assess success, increase principals' accountability and reward the deserving.

The current law is too punitive, Education Secretary Arne Duncan said via a conference call with reporters on Sunday, per MSNBC News. Consequently, school districts lower their standards and narrow their curricula to avoid being labeled "failing." Failing schools are either closed or turned into charter or private schools, reports CBS News. President Obama went on to say that "according to new estimates, under the system No Child Left Behind put in place, more than 80 percent of our schools may be labeled as failing," according to the Chicago Sun-Times. The definitions of "success" and "failure" for schools are "out of line," he added, and a new labeling system is needed.

Obama also noted that overhauling the existing education policy needs both Democratic and Republican input, reports The New York Times' The Caucus. Both sides agree education reform is necessary but disagree on how to achieve it. Democrats tend to favor additional financial investment in schools while Republicans push for more local decision-making control.

Education reform also takes money, and the country must make the necessary investment, Obama said, per CBS News. "We can't cut the things that will make America more competitive. A budget that sacrifices our commitment to education would be a budget that's sacrificing our country's future," he said. "And I will not let it happen."