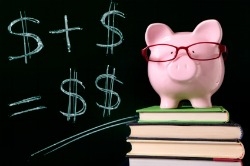 Department of Labor information released today shows that President Obama's budget for the 2013 fiscal year aims to improve the link between community college education and the ability to find a high-growth, high-skilled job. In fact, $8 billion has been requested in the budget for just this plan, aptly called the Community College to Career Fund, according to a Department of Labor press release.

"We are at a make or break moment for the middle class and the Labor Department's fiscal year 2013 budget request reflects our commitment to supporting an American economy that's built to last," Secretary of Labor Hilda L. Solis said in the press release. "Our budget request focuses on programs that will help keep America's workforce strong and innovative, while providing needed worker protections. It also makes responsible and reasonable cuts that are rooted in current economic realities and a continued focus on increased efficiency and effectiveness."

The Community College to Career Fund is the most significant portion of the President's requested education spending, reported Reuters. It looks to train some 2 million workers for employment in fields such as clean energy, health care, and high-tech manufacturing. The money would be used to help develop partnerships between community colleges and local businesses, thus resulting in job training.

David Blaine, the American Association of Community Colleges' senior vice president for government relations and research, indicated the Community College to Career Fund could have a positive impact.

"Work-force training programs are costly and given sustained cuts from state and local sources, these proposals could greatly benefit local economies," Blaine told The Chronicle of Higher Education.

The proposed 2013 fiscal budget also includes other facets important to education. According to The Chronicle, some of these educational proposals include increasing the Pell Grant to $5,635 (an increase of $85); doubling the number of available work-study jobs; expanding the Perkins Loan from $1 billion to $8.5 billion with extra money going to schools that keep tuition relatively low and graduate higher numbers of Pell grant recipients; maintaining the interest rate on Stafford Loans at 3.4 percent for another year; and offering $1 billion in grant money similar to that of "Race to the Top."

Details are still becoming available about the Community College to Career Fund, but Obama is expected to say more at an Annandale, Va., community college today. Reuters reported that it is important to note that this new budget will need Congressional approval; The Chronicle noted that this may not be likely given that in 2009 Obama's $12 billion request for community colleges became a much smaller amount of $2 billion after going through Congress.