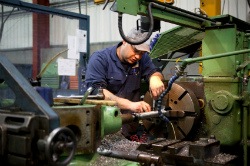 After a dismal May jobs report, President Barack Obama announced he would renew his emphasis on expanding manufacturing jobs.

According to The Charlotte Observer, the program, called "Skills for America's Future", is an initiative that to train 500,000 people for various manufacturing jobs over the next five years. Bloomberg noted that the program will focus on 30 states and will help backfill the 2.7 million workers 55 years and older who are expected to retire in the next 10-15 years.

Though the President discussed the program today at Northern Virginia Community College in Alexandria, the initiative was originally introduced on October 4, 2010. However, the administration will be adding two new elements to boost its success. The first addition is support from more companies, groups or foundations, including Greg Brown, chairman and chief executive of Motorola; Bill Green, chairman of Accenture Inc., and Brad Keywell, co-founder and director of Groupon. Members of the board will oversee the program.

The second effort is a certification program developed by companies and manufacturers that will provide students with universally-accepted credentials. The administration plans to roll the certification program out to 200 community colleges. According to The Charlotte Observer, the program costs $2 billion.

The expansion will also focus on high school students across the country by helping 30,000 at-risk youth obtain professional credentials in high-demand manufacturing jobs. It will also create an online resource for job seekers who have already earned their credentials.

"We haven't been as attentive to the manufacturing sector as we should have," said Bloom.

The Wall Street Journal reported that while the programs will address the need for more skilled workers by providing education and training that has been tailored to the needs of employers in a given area, Bloom pointed out that obtaining a certificate does not guarantee a job. Still, he said that a credentialed job seeker's chance of getting a job is "obviously far, far better than if you're simply training yourself abstractly without knowledge of what the needs of the local employers are".