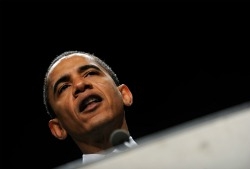 President Barack Obama and U.S. Secretary of Education Arne Duncan met with the heads of 10 colleges on Monday to discuss ways to improve college education while reducing costs.

The college presidents in attendance came mostly from public institutions, according to The New York Times. Additionally, two directors from non-profit education foundations were also present.

"It was an unusually interesting meeting," Jane Wellman, founder and director of the Delta Project, which is aimed at studying college costs, said in The New York Times. "These were all people who had led institutions that had done something about reducing spending or improving student learning."

The discussion lasted about two hours and broached a number of topics, reported Inside Higher Ed. Questions addressed included how colleges could remain affordable while producing more graduates and how to institute affordability strategies at one school across a wider spectrum.

Participants also reported discussing the importance of linking postsecondary education back to K-12 education and expanding the use of technology to help with the fit, according to The New York Times.

"If we're going to address the 37 million adults with some college and no degree, we can't just tweak the existing model," Robert Mendenhall, president of Western Governors University, was quoted as saying in The New York Times. "Mostly, in higher education, technology is an add-on cost that doesn't change the model at all. We need to fundamentally change the faculty role, and use technology to do the teaching."

No new policies were established during the meeting, but a few participants indicated they thought some could be in the pipeline.

"The key message was a challenge to us to question all our strongly held assumptions, including getting our faculty to think differently about teaching," said Jared Cohon, president of Carnegie Mellon University, in The New York Times.

"Readout of the President's Meeting with College Presidents," whitehouse.gov, December 5, 2011, Office of the Press Secretary