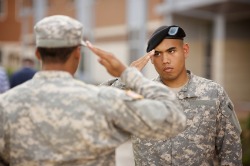 Having repealed the ban on gays serving openly in the armed forces, President Barack Obama urged American colleges and universities to welcome military recruiters and officer training programs back on campuses.

Currently top schools such as Harvard University, Yale University and Columbia University have banned Reserve Officers Training Corps (ROTC) programs, The Wall Street Journal reported. Since the Vietnam War, barring military access to college recruits has been part of an effort to protest foreign confrontations and question the academic rigor of those programs. In recent years, however, reasons to limit military involvement on campus have also included discrimination against gays and lesbians.

Because Congress has recently rescinded the 1993 law banning gays from serving openly in the armed forces, President Obama has called on colleges to open back up to the military.

"I call on all of our college campuses to open their doors to our military recruiters and the ROTC," said President Obama in his State of the Union address. "It is time to leave behind the divisive battles of the past. It is time to move forward as one nation."

Shortly after the repeal of the "don't ask, don't tell" policy last month, officials at Harvard, Yale and Columbia have all indicated that they would welcome ROTC to restart programs on campus. Many other schools are expected to follow suit.

According to The Washington Post, Defense Secretary Robert M. Gates, who was also former president of Texas A&M University, called on academic institutions in 2008 to "move past whatever antagonism to ROTC still exists and demonstrate respect at the highest levels for those who choose to serve."

In a display of cooperation between the government and academia, Gates met with Yale President Richard C. Levin to discuss allowing the ROTC to be present on campus.

"This has been a difference of principle that I think no one has wanted, but it has been a longstanding and very difficult matter," Bollinger said. "If it were resolved with the elimination of 'don't ask, don't tell,' there would be an enormous feeling of gratitude and openness, more openness to relations with the military."

Despite dialogues between the military and academic officials, there is no absolute guarantee that ROTC programs will materialize, The New York Times noted. For one, the military lacks resources to fund ROTC units. In addition, student interest in ROTC is very low--10 to 20 students normally participate in on campus programs.

"I would be the most surprised person in the world if the military came back to Harvard or Yale," said Diane Mazur, a law professor at the University of Florida and a former Air Force officer. "The military doesn't have the staffing or the funding, and it's very expensive to start a new ROTC detachment."