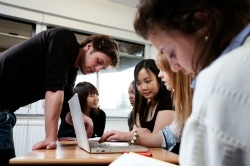 On Tuesday, the Princeton Review released a list of the top 300 undergraduate professors.

The list appears in a new guidebook titled "The Best 300 Professors," which is put out by Random House/Princeton Review. The book profiles the nation's top 300 undergraduate professors, identified by students, who ended up coming from 122 colleges and universities. The book also provides information on the schools where they teach, according to a Princeton Review press release.

However, the professors are organized by specific academic field and not by actual ranking, so there is no way to find out who rated number one or if that spot was shared. Instead, professors are broken out into area of instruction, composed of some 60-plus academic categories such as accounting, engineering and writing.

"We developed this project as a tribute to the extraordinary dedication of America's undergraduate college professors and the vitally important role they play in our culture and our democracy," said Robert Franek, Princeton Review's senior vice president/publisher, in the press release. "One cannot page through this book without feeling tremendous respect for the powerful ways these teachers are enriching their students' lives, their colleges and ultimately our future as a society."

Paring down the list took substantial effort. Some 42,000 professors were rated by students using the ratemyprofessors.com site. From there, the Princeton Review reduced the top number to 1,000 and then followed up by surveying administrators and students at the professors' schools to garner more detail.

While data about the top professors was not released, Princeton Review did share information about the number of top professors as found by state, according to the Yale Daily News. These included New York, which topped the list with 25 best professors, followed by Massachusetts with 20 and California with 19. Additionally, information about the academic disciplines with the highest numbers of best professors was also released. These fields included biology, English, history, math and psychology.

Professors came from a variety of schools. At Yale, two faculty were included in the book: Paul Bracken, a professor of management and political science, as well as Karen von Kunes, a senior instructor in the school's Slavic Languages Department. According to The Daily Californian, seven professors from the University of California, Berkeley made the list. Two of these -- Denis Auroux and Zvezdelina Stankova -- came from the school's math department while Robert Beatty came from biology; Ron Gronsky from science and engineering; Alan Karras from international studies; Steven Pedersen from chemistry; and David Wetzel from chemistry.

Wetzel, actually a lecturer with the chemistry department at UC Berkeley, said he was surprised to be chosen for the list, although he knew he was a candidate. One secret of his is not to use notes while teaching.

"I've found that the more I teach passionately, the more enthusiasm I convey," he told The Daily Californian.

"It is always a tremendous honor to be recognized by your students for your work in the classroom," Macy Finck, an economics instructor at Auburn University, was quoted in al.com as saying. "I am proud of any contribution I can make to further enhance Auburn University's excellent academic reputation."