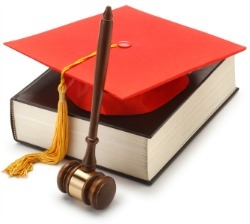 It is a difficult time for law school graduates. According to Forbes, American Bar Association data suggests that only 56.2 percent of 2012 law graduates were able to find long-term, full-time jobs as lawyers in the first year. The overall unemployment rate for new lawyers was 10.6 percent, more than three points higher than the national average.There is some hope, however: A new ranking from the Princeton Review spotlights the top ten U.S. law schools that offer the best career prospects -- to the tune of as much as 99 percent employment. That is, of course, only for those students who managed to be admitted at all.

The Princeton Review analyzed 169 law schools on a number of metrics to determine which offer students the best career prospects, reports Forbes. In addition to looking at employment nine months after graduation and starting salaries, the firm also collected survey data from 18,5000 students. Students were asked to what extent their alma maters offered and encouraged practical experience, how they would rate schools' opportunities for judicial externships and clerkships, and how prepared graduates feel entering the workforce.

This year's big winner, for the second year in a row, is Columbia University where 99 percent of its 2012 graduates were employed by 9 months following graduation. Their median starting salary: $160,000. The University of Chicago claimed the No. 2 spot. Its graduates also reported a 99 percent employment rate and a median starting salary of $160,000, but its student surveys were less enthusiastic than those submitted by Columbia Grads. The University of Pennsylvania Law School ranked third with a 98 percent employment rate among 2012 graduates, who also earn about $160,000 a year.

According to Forbes, the message behind these statistics is that if you want to succeed in law, you should shoot for a top tier school. The flipside, however, is that students attending these prestigious programs are likely to walk away with more than $100,000 in student debt. The cost of getting a law degree at Columbia, for instance, exceeds $200,000.

Another potential roadblock for future law students considering these schools: They are highly selective. The Huffington Post reports that a separate Princeton Review ranking, also published this week, identifies the law schools that are most difficult to get into. Though Yale and Harvard University took the top two positions, the University of Chicago, the University of Pennsylvania and Columbia were all featured in the top 10.

The Princeton Review publishes its law school lists each year. Other featured lists include the law schools with the best professors, the best classroom experience and the most competitive students. It also identifies schools with the most liberal and most conservative students. Do not expect to find a best overall law school ranking, though. According to a press release published on The Princeton Review, the firm does not rank schools hierarchically.

"Each school in our books offers outstanding academics: no single law or b-school is 'best' overall," Robert Franek, SVP / Publisher for The Princeton Review, said in the release. "We publish rankings in several categories and detailed profiles of the schools to give applicants the broader information they need to determine which school will be best for them."