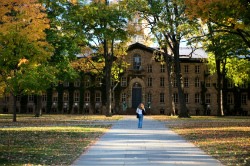 Last week, the University of South Carolina suspended fraternity rush. This week, Princeton University took that to another level--freshmen students will soon be prohibited from affiliating with fraternities or sororities for an entire year.

Beginning fall 2012, first-year students will be banned from all Greek life activities for the duration of their freshman year, announced Princeton University. Unlike USC, however, the ban is not in response to any particular incident. Instead, Princeton University President Shirley M. Tilghman wanted to enforce a shared experience among undergraduates that revolves around its residential colleges and eating clubs. The decision was also based on recommendations from a 13-member student-faculty-staff working group last spring, which, according to NJ.com, released a report that found a connection between fraternity and sorority rush events and excessive drinking. The report also noted that fraternities and sororities promote a sense of "social exclusivity and privilege" and prohibits students from exploring everything the university--and other students--have to offer. The decision was communicated to incoming freshmen and their families by Vice President for Campus Life Cynthia Cherrey and Dean of Undergraduate Students Kathleen Deignan, reported the University.

"A major concern is that [fraternities and sororities] select their members early in freshmen year, when students are most vulnerable to pressures from peers to drink, and before they have had a full opportunity to explore a variety of interests and develop a diverse set of friendships," wrote Cherrey and Deignan in a letter to the entering freshmen class. "We hope students coming to Princeton will want to expand their circle of acquaintances and experiences, not prematurely narrow them." Students will be able to pursue Greek membership after their freshman year.

Fraternities and sororities have been excluded from campus life for most of the University's history. The organizations were banned, but began to reemerge in the late 1980s and although some 15 percent of undergraduates participate in four sororities and about twelve fraternities, the organizations are still not recognized by the institution.

"Because Princeton social life revolves around the residential colleges and the clubs and because of concerns that we have had about aspects of fraternities and sororities, the University does not recognize fraternity and sorority chapters," explained Cherrey and Deignan.

According to Bloomberg, some students oppose the one-year ban, arguing that the organizations actually help students meet new people, expand their personal and professional networks and make lifelong connections.

"Developing close friendships is both difficult and important during freshman year, and Greek societies serve that purpose for the large number of students who are interested in them," said Jake Nebel, a junior who is master of the university's Alpha Epsilon Pi chapter, in an e-mail.

Those who opposed the ban suggested that freshmen be allowed to participate in Greek life during their second semester, but the idea was rejected.

NJ.com reported that Peter Smithhisler, president and CEO of the North-American Interfraternity Conference questioned how officials will even enforce the ban. According to the University, Tilghman decided to implement the ban next year, rather than this year, so that a committee of students, faculty and staff could figure out those logistics. The committee will also use the time to come up with ways to improve social life on campus, including new ways to help all students connect with one another.

"Princeton to ban freshman affiliation with fraternities, sororities as of fall 2012," princeton.edu, August 23, 2011