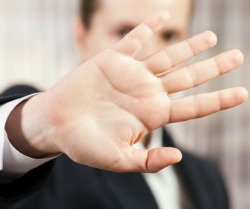 Google Glass -- a wearable computer with a head-mounted display that resembles a pair of glasses -- is months away from its projected release, but is already causing a stir. Some hail it as a technological game-changer that could boost productivity, enrich the human experience and make life more convenient. Others fear that a technology that lets someone record anything, anywhere, could be a privacy nightmare. These concerns have trickled into the workplace, too, leading some businesses to ban the device without even test-driving it.

Mashable reports that Google Glass has many organizations rethinking their technology and privacy policies, and that several businesses -- like restaurants, casinos and theaters -- have already banned it from their premises. Eric B. Meyer, a partner in the labor and employment group of the Dilworth Paxson law firm, believes other businesses might follow suit as they begin to mull over the device's privacy implications, especially in "industries and businesses where confidentiality or privacy is paramount, such as healthcare, financial services, legal, government."

One of the reasons Glass could complicate things in the workplace is its recording feature, Heather Bussing, an employment attorney, told Mashable. "When everything someone sees can be recorded without other people knowing, it makes people uncomfortable," she said, noting that some states even make it illegal to record someone without prior consent. "At best, it's bad manners."

The Google Glass privacy issue is not a new concern, but it is a persistent one. According to The Washington Post, the House Bipartisan Privacy Caucus requested information from Google in May regarding how Glass would work within the company's privacy standards. In June, several privacy regulators from around the globe asked Google to clarify what data would be collected, and how it would comply with data protection laws. So far, notes the Post, officials still have many unanswered questions about this new wearable technology.

Susan Molinari, Google's vice president of public policy and government relations said the company is "thinking carefully" about the feedback it received from law makers, but currently has no plans to change its privacy policy. "Protecting the security and privacy of our users is one of our top priorities," Molinari said in a response to the Privacy Caucus, as reported by The Washington Post.

Not all companies think Google Glass is bad news for business. According to Forbes, some believe the device -- and its marketing potential -- could revolutionize the way organizations do business. Matt Mankins, chief technology officer at Fast Company, suggested Glass could also help employers monitor and better connect with their employees. "Just as cell phones kept businesses in touch with distant employees, Glass promises to keep business processes and data in-step with individual workers," he said.

Is Glass is a ticking privacy time-bomb in the workplace? Mashable suggests the issue can be explored more thoroughly as the device becomes more prevalent. In the meantime, Meyer encourages employers to train and educate employees on privacy policies or employment laws affecting situations where the device could have an impact.