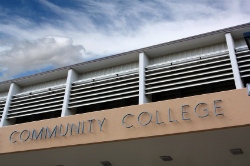 A new bill may allow students to buy their way into overcrowded community colleges.

According to the Contra Costa Times, the bill, by Assemblywoman Julia Brownley (D-Santa Monica) and Assemblyman Cameron Smyth (R-Santa Clarita), would create separate courses, or "extension courses", where students would pay a non-subsidized cost to enroll. Community college classes are traditionally subsidized by the state, so students normally pay $26 per unit--though that cost will go up to $36 per unit later this year. Extension courses, on the other hand, will be offered at the full price, which has been estimated to be around $150 per unit. The University of California system already offers similar courses.

As GOOD pointed out, California colleges and universities have struggled to meet demands in the face of severe budget cuts. The state has already cut $1 billion from community college budgets over the past three years, leaving schools with no other choice but to create a tier of more expensive courses for those who can afford them.

"This is an unprecedented time for California higher education, and the cuts to community colleges have been unprecedented," said Don Girard, senior director of government relations at Santa Monica College, one of the institutions sponsoring the bill, to Inside Higher Ed. "You have a very bad situation for students because all community colleges, to the extent they can, are filling classes as much as they can. We're at 102 percent of capacity here. We're turning away tens of thousands of students."

Indeed, Jack Scott, California community college chancellor, estimated that some 140,000 students have been turned away from the 112-college system this year because they could not get the classes they needed. Furthermore, he also reported that "over 95 percent of all classes are at capacity, and an estimated 10,000-15,000 students are on wait lists for courses".

Supporters of the bill said offering extension courses at a higher price to wealthier students will allow community colleges to provide additional courses to disadvantaged students "at no additional cost to the state". Furthermore, supporters argued it would help students complete their degrees faster by eliminating delays due to overcrowded classes. Critics, however, said the bill is tremendously flawed.

Critics argued the bill would further exacerbate the wealth gap, not only between students but also faculty members. Ron Norton Reel, president of the Community College Association, pointed out that faculty members may prefer to teach only extension classes in order to make more money. Still, even if new teachers are not hired, Shaw DeMille, student body president at Pittsburg's Los Medanos College, told the Contra Costa Times that having a current teacher teach the class, means that there would be one less teacher for regular classes.

GOOD pointed out that lower-middle and middle-class students would actually be hurt the most because unlike lower income students, they are not eligible for Pell Grants and do not qualify for FAFSA.

According to Inside Higher Ed, the bill has already passed the Committees on Higher Education and Appropriations. It is expected to be brought to a vote on the Assembly floor in the upcoming weeks.

"Community College If You Can Pay," insidehighered.com, May 19, 2011, David Moltz