Proposed Ohio Bill Would Give Stipend To Student Athletes 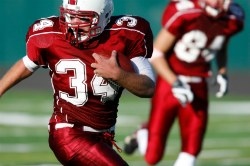 Lawmakers in Ohio proposed a new bill this month that would allow college athletes to receive several thousand dollars in annual stipends, but many have voiced opposition to the legislation.

House Bill 411, introduced by state Reps. Alicia Reece, Clayton R. Luckie and John Barnes Jr., would allow universities with Division I athletics to pay up to $8,000 in stipends per athlete. At Division II schools, the stipend would be up to $6,000, and up to $4,000 for all other divisions. The legislation also allows separate accounts to be established for each athlete where friends and family could contribute up to $4,000.

The bill comes in the wake of a scandal at Ohio State University, in which football players improperly sold memorabilia for tattoos and cash.

"I think it's something that's sort of been a long time coming," said Kenny Frease, a senior basketball player at Xavier University, who was interviewed by Cincinnati.com. "We can't go out and get a job with sports taking up so much time. When you run out of money, you have to rely on somebody else, like your parents or somebody to give you money."

Proponents of the bill argue that student athletes generate billions of dollars for university athletics departments while earning nothing for themselves. Reece, one of the bill's sponsors who also used to be a Division I basketball player in college, noted that many student athletes are forced to quit their sport in order to make ends meet during the school year.

"I saw some of my teammates struggle," she told Cincinnati.com. "They didn't have money for personal items, gas, bus fare. They came from homes where it was hard on the families. Some didn't make it."

The National Collegiate Athletic Association, however, is adamantly opposed to the legislation. As reported by the University of Cincinnati's student publication, The News Record, the NCAA points out on its website that student athletes "are students first and athletes second. They are not university employees who are paid for their labor."

Others point out that stipends should be unnecessary, since student athletes already receive scholarships and grants. "They get free meals, free school, a free education that they sometimes don't even want," said Danielle Thompson, a student at the University of Cincinnati who was interviewed by Fox 19. "They just want to be able to play the sport that they're here to play."