Prospective College Students Have New Tool to Measure Degree's Worth 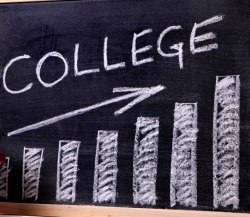 College costs are at an all-time high, leaving graduates more indebted than ever. Conventional wisdom suggests that the benefits of earning a degree justify the investment, but is that always true? At what point does college no longer make good financial sense? A new website seeks to find out.

According to Forbes, a rapid rise in higher education costs has left some questioning whether a college degree is worth it. Yes, college graduates earn more: The U.S. Census Bureau estimated that bachelor's degree holders who graduated in 2011 earned 82 percent more than high school-educated workers. At the same time, noted Forbes, the average cost of attending a private, not-for-profit undergraduate program increased by over 37 percent between 2000 and 2011.

"The cost of college is growing at a very high rate, and will soon eat away at any reward the degree might bring," University of Arkansas graduate Jared Moore, who recently launched his own college assessment website called College Risk Report, told Forbes.

In an article he penned for The Chronicle of Higher Education, Jeff Selingo stated that applying financial metrics to higher education lets college hopefuls measure the "return on investment," or ROI, of earning a particular degree. Approaching education like a stock investment probably makes many academics cringe, he noted, but allows students to make "better-informed" decisions.

Moore told Forbes that his website may not factor in all considerations. Certain colleges offer intangible benefits such as mentorship opportunities, personal connections, and social and networking skills, and geography can also play a role in earnings. Still, College Risk Report may help paint a clearer picture of whether a particular degree may -- or may not -- pay off down the line.

Selingo suggested in The Chronicle of Higher Education that in addition to providing students with important information, tools such as College Reality Check could force schools to rethink -- and improve -- how they value and price their own programs.

"As tuition prices and student debt continue to climb and data aggregation and visualization improve, the number and quality of those consumer tools will only increase," wrote Selingo. "So in the long run, college officials who don't like being judged on such measures might best focus on improving their numbers."