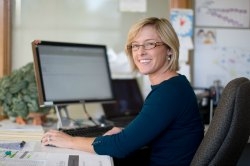 A new study from Prudential Financial shows that women are the primary breadwinner in families.

The results were revealed Wednesday at a New York City luncheon attended primarily by women, according to Forbes.The luncheon included a panelist of speakers who talked about study results and the implications for women.

However, the study, "The Financial Experience & Behaviors Among Women," showed that women were just slightly more likely to be breadwinners than men. In fact, of the 1,400 women surveyed, just 53% were reported to be primary breadwinners.

"While our past research focused on women who are primary or joint financial decision makers, this new data shows that consistent with demographic trends and reflecting the impact of the financial crisis, the majority of women today are financially responsible for generating their own and their families' income," said Susan Blount, senior vice president and general counsel for Prudential, in a press release.

Some 600 men were also queried for the survey, which has been conducted biennially since 2000.

Forbes noted, however, that 40 percent of the women surveyed were single or living alone, so, as a result were responsible for their own family finances. And it was the 22 percent of women who were married or living with a partner that bumped the "breadwinner" mark over 50 percent. Prudential attributes the increase in female breadwinners to partners losing jobs, divorce or delays in marriage, according to the press release.

Forbes also noted that just because 53 percent of women indicated they were breadwinners doesn't mean they were making a lot of money, at least according to Lynette Khalfani-Cox, a personal finance expert, who participated in the panel event. In fact, the press release indicates that 30 percent of the surveyed women reported struggling with bills or being unable to keep up with financial expenses.

The study also looked at attitudes toward money. While it showed that 45 percent of men think they are well-prepared for making financial decisions just 23 percent of women felt the same way. Stephanie Sherman, a certified financial planner for Prudential also present at the luncheon, described this gap as "frightening," according to The Mutual Fund Wire.

Deborah Owens, CEO of Owens Media Group, discussed the differences between women and men when it came to finances. She said that women worry more about household expenses and debt while men focus on other things like the overall health of the economy and retirement. She also indicated that women do have the financial prowess to make decisions and plan for the future.

"Women are normally the CFOs of their household, they actually manage those finances for the household," she said. "So it baffles me: where is that lack of confidence coming from? It doesn't translate on the investment side, when in fact, it's the same muscle you're using for investing."

"Women Are Primary Breadwinners, Whether They Like It or Not," businesswire.com, July 11, 2012